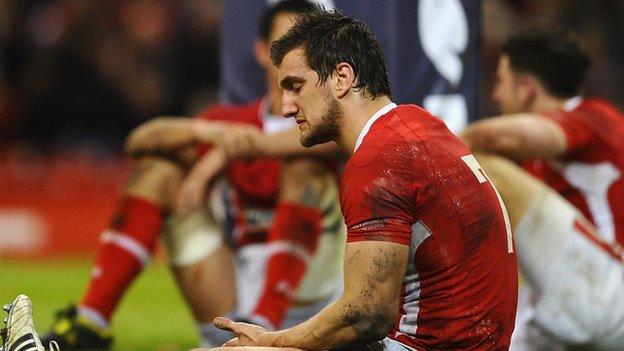 Wales captain Sam Warburton says the loss to Australia at the Millennium Stadium is the worst of his career.

It left Warburton and coach Warren Gatland "gutted" as they reflected on a seventh consecutive defeat since Wales won the 2012 Six Nations Grand Slam.

"To be in control really for the majority of the second half and in the last play of the game we slip-up. It's really hard to take."

It is the third time Wales have been pipped by the Wallabies in less than a year and condemned Wales to the third group of seeds for Monday's 2015 World Cup draw.

They suffered narrow defeats in the second and third Test matches in Australia last June.

But Warburton had no doubt this was the worst.

"We were at home, it's off the back of a bad run really and we did everything we could to win that match," he said.

"We put ourselves in a position to win and I know that was the same out in Australia, but you've got to win your home games and we've failed to do that this campaign."

The player, who was being widely tipped as a potential Lions captain after Wales' performances in the 2012 Six Nations, said he could not put his finger on why Wales have lost so many close matches.

"I don't know, is the honest answer," he told BBC Radio Wales.

"That's the question that's killing me. From a player's point of view it's just so hard because we keep training really hard, do everything we can to try and put things right and... It's just terrible.

"We can take a lot of positives from the game.

"You know, they [Australia] went down to Twickenham and beat England, which is a very difficult thing to do so they're obviously a quality team, and to nearly win was a great effort, but we have to take that next step and beat these sides.

I thought we played some outstanding rugby. It's the best we've played [this autumn]

"It's disappointing to finish on four losses."

Gatland said: "We are pretty gutted. I thought apart from the last minute, we played some outstanding rugby today.

"It was a close, tight Test match, which you expect. We put ourselves in a position where we should have won."

But the New Zealander admitted his side had only themselves to blame.

"The disappointing thing for me is we turned over a line-out and it was obvious Australia were going to run the ball from behind the goal-line and we allowed them to get 30 metres from that and release a bit of pressure.

"We should have had guys in the front line and defended that a bit better.

"Also in the last couple of plays we had people hanging back so it was a bit of naivety. It was a tough match and it was disappointing.

"We haven't spoken to the players yet, but I would want to know what was our communication at the last scrum.

"They were set up to move the ball and we had to make sure they did not get out of their 22.

"I am not sure we communicated or spoke, but until I speak to the players I am not sure."

Bitterly disappointed scrum-half Mike Phillips admitted to feeling "devastation" at the manner of defeat, adding: "We'd rather lose by 50 points, I think.

"But we've got to take it on the chin.

"But I thought we played some outstanding rugby. It's the best we've played [this autumn]"