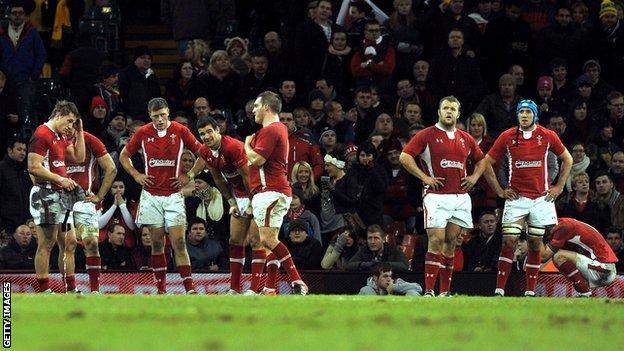 "Enough is enough," Sam Warburton had declared beforehand, addressing the thorny issue of Wales' inability to beat one of the southern hemisphere's big three over the past four years.

But just when you thought the tide had finally turned, and a 15-match barren run against Australia (seven), New Zealand (five) and South Africa (three) was about to end, here was the Welsh captain being forced to dissect another heart-breaker.

"It is probably the hardest defeat I have had to take," Warburton said, struggling to explain this latest last-ditch calamity to befall the Red Dragonhood.

"It felt like today was the day we were going to do it… we were so close… I can't say why exactly… maybe a bit of composure… we have just been in this situation so many times before."

They say you learn more from your defeats than your victories, but Wales are proving depressingly slow learners.

Saturday's 14-12 defeat was their sixth by the Wallabies in the last 14 months. The margins have been, respectively, three, six, eight, two, one and two points.

While losing a clutch of key players to injury has clearly undermined their cause this autumn, it is difficult to escape the conclusion that Wales' problems are as much mental as they are physical.

Warburton openly acknowledged the demoralising effect of another shattering loss, while head coach Warren Gatland was similarly candid. "We put ourselves in a position where we should have won it," he said. How could he declare otherwise?

Having pinned Australia in their own 22 with two minutes on the clock, Wales could not close the deal.

Gatland's dismay at the manner his men snatched defeat from the jaws of victory ensures there will be an inquest into the decision-making, communication, defensive set-up and lack of execution that set in motion a depressingly familiar tale.

"That's the worst defeat I've ever been involved with. To be in control really for the majority of the second half and in the last play of the game we slip up. It's really hard to take."

With three minutes left, Rhys Priestland kicked a penalty to touch, and Wales won the line-out in the left corner. But their failure to look after the ball allowed Australia to win a penalty. Opting for a scrum, the Wallabies moved the ball wide and made too many easy yards for Gatland's liking.

Even then all was not lost, with Wales turning the ball over with a minute to go. But Priestland's clearing kick failed - crucially - to find touch, and the Wallabies launched last one attack.

Asked if he had given the game up by that stage, the response of Australia coach Robbie Deans response was instructive. "Never mate, never. And more importantly, the boys hadn't either."

And why would they? In June they had twice trailed Wales approaching the final stages, and had the self-belief and skills under pressure to salvage victory.

Berrick Barnes sent out one more probing pass, Mike Harris drew his man to release Dave Dennis, and the replacement flanker sent Kurtley Beale haring into the right corner to deliver another dagger into the bleeding heart of Welsh rugby.

"Apart from that last minute, we played some outstanding rugby today," Gatland said. "We have just got to be a bit smarter at the death. We have to be more clinical."

How many times has he uttered similar words over the past four years?

It was not all doom and gloom, though.

Attack coach Rob Howley, who will take the reins again for the forthcoming Six Nations with Gatland resuming Lions duties full-time, took heart from the performance of the back three, centre Jonathan Davies and fly-half Rhys Priestland, who without being entirely convincing, showed an improvement in his kicking game and an ability to spark the Welsh attack.

"Wales had control of the game and the defensive organisation was not good enough for the try. Australia took their one last chance. They need to redeem themselves in the Six Nations but have to play a lot better."

But their failure to profit from thrilling first-half breaks by Alex Cuthbert and Leigh Halfpenny proved critical in the final reckoning, as did Halfpenny's missed penalty with the last kick of the first half. It shouldn't have come down to the last two minutes.

So where does this leave Wales after going through an autumn campaign winless for the first time?

With the outstanding Halfpenny - "a huge talent, he plays well above his weight and has a huge heart" said an admiring Deans - joining an already lengthy casualty list, the first priority will be to get bodies, as well as minds, restored to health in the coming weeks.

For the second half against Australia, with their four frontline locks all injured, Wales were relying on a second-row partnership of Lou Reed, starting his first Test, and Ryan Jones, a back-rower filling in gamely at lock. Against a side as proficient as Australia, it was little wonder the line-out frayed.

The Six Nations is only nine weeks away, and that March day when the Grand Slam was sealed with victory over France, converting the promise of the 2011 World Cup into tangible achievement, seems like a lifetime ago.

Wales will begin the defence of their title against Ireland on 2 February with no victory to their name in the intervening period, seven successive defeats draining the spirits of a talented group of players. But not, according to Warburton, belief that their luck will turn, one day.

"I don't think it will dent the players' confidence," the captain added, not altogether convincingly. "They know how good we can be, as we showed again today. We just have to remain positive and ambitious, as we always are."