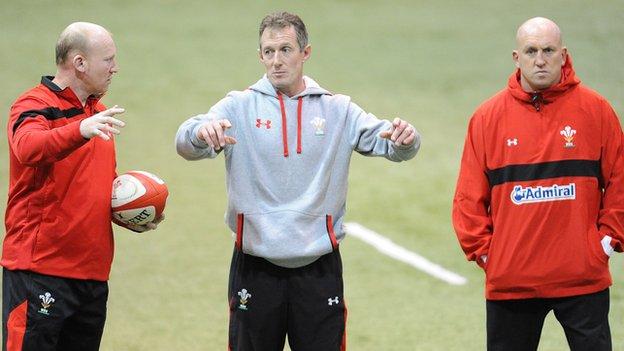 Rob Howley will need help to guide him through his first taste of the Six Nations as Wales coach, according to former flanker Martyn Williams.

Howley will take charge of Wales' title defence while head coach Warren Gatland prepares to lead the Lions in Australia next summer.

Williams said: "I think Wales should bring somebody in to help Rob.

Jenkins, Wales' record points scorer, is employed in the national set-up as a skills coach with special responsibility for place kicking.

Williams played with Jenkins for Wales, Cardiff and Pontypridd before seeing him develop as a coach in Gatland's back-room team.

"He has a big influence over the Welsh backs," said Williams, who won 100 caps for Wales. "He's a great backs coach."

"I've worked with him [Jenkins] with Wales and he could push forward and assume a bit more responsibility allowing Rob [Howley] perhaps to have a bit more of a head coach role."

Saturday's 14-12 defeat by Australia was Gatland's last game in charge of Wales before he takes a sabbatical to coach the Lions.

While Gatland recuperated after breaking both heels in an accident, Howley took charge of Wales against the Barbarians in June and for the following three Test matches against Australia.

He was also at the helm for the opening two games in the autumn series against Argentina and Samoa as Gatland concentrated on his Lions duties.

After beating the Barbarians, Wales lost all matches under Howley, and Holley also believes he will need extra support while he assumes the head coach role again in Gatland's absence.

"I should imagine he'd want to continue being a hands-on coach, but Warren [Gatland] is more of an elder statesman, you know, a delegator in the back room if you like.

"So it'll be interesting to see if they bring somebody else in to help him [Howley]."

Wales will begin their Six Nations title defence against Ireland in Cardiff on 2 February and will discover on Monday who they will face in the pool stages of the 2015 World Cup.

The loss to Australia saw Wales drop out of the International Rugby Board's top eight in the world rankings, leaving them in the third group of seeds for the World Cup draw.