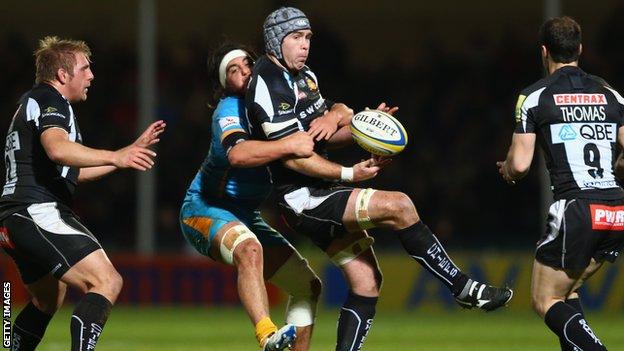 The Chiefs travel to Scarlets in the Heineken Cup on Saturday off the back of five successive wins.

"We've got so many guys on form, I'm struggling to shoe-horn them all into the team," Baxter told BBC Radio Devon.

"We're in a nice place in the Premiership. We're just about half-way through and I can see us getting stronger and getting better."

The Chiefs remain unbeaten at home in the league this season and moved up to fifth in the table following Saturday's victory.

And Baxter feels his pack deserved special praise for the way they performed at Sandy Park.

"Our forwards really stood up and gave us momentum," he said.

"Our driving play, our scrum and our set-piece probably shaded the difference for us on a tough night when the rain came in."

But it was 19-year-old back Jack Nowell, who scooped the man-of-the-match award.

"He's like a Duracell bunny, his batteries are fully charged and off he goes," Baxter enthused.

"We've got to make sure we don't run his batteries flat and make sure we give him opportunities when he's at his best and in form."