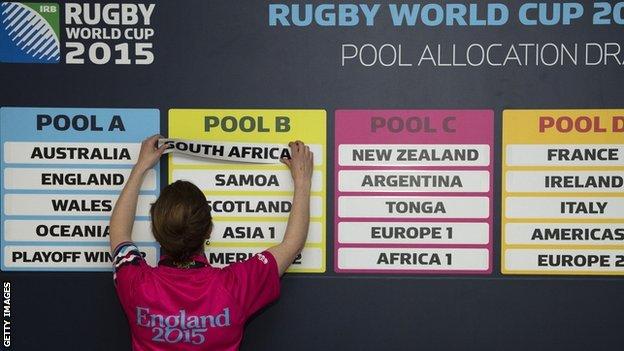 Scotland captain Kelly Brown is expecting a physically-tough World Cup in England in 2015.

The Scots have been drawn with South Africa, Samoa and two qualifers, Asia 1 and Americas 2, for the 2015 Rugby World Cup in England.

Despite droppping to 12th in the world rankings Scotland have managed to avoid the more awkward second-seeded sides.

"My first thought is that it's going to be incredibly physical," said Brown.

"It's a challenge, but it's one that, as a squad we're really looking forward to.

"We know that if we absolutely nail our performance then we can do well, it's all about making sure that our standards are really high every time we go out there.

"We're here to make Scotland proud, and we know that lately we've not been doing that and it's up to us to work hard over the next three years."

Scotland attack coach Scott Johnson, was optimistic about their chances of qualifying from the pool.

"We knew whatever pool we got would be pretty tough," he said. "But we think we'll be pretty good in that pool.

"I think it is an outstanding draw for Scotland, a very lucky draw. Scotland's performances in the autumn left them in the third group of seeds and if they had got New Zealand and England, it would have been absolutely horrible. So to draw South Africa and Samoa is very pleasing in comparison. It won't be easy but it could have been an awful lot harder.

"It's nice getting those physical Southern Hemisphere sides up to the north.

"We've determined that that is our goal, and there's nothing to make me believe in that draw that's taken place that will blow us off that course," he said.

The identity of the other two teams in the group will be decided in 2014 and 2013 respectively.

The American qualifier will be decided in 2013, when the loser of the USA v Canada round three qualifier plays the highest-placed team of the 2013 South American Rugby Championship outwith Argentina, who qualify directly.

Whoever wins this tie qualifies as Americas 2.

Asia 1 will be the winning team of the 2014 Asian Five Nations championship.

Scotland have played South Africa once before in the World Cup, losing 46-29 in a pool match at Murrayfield in 1999.

They have also met Samoa in the same tournament, winning 35-20 in a quarter-final play-off before going out to New Zealand in the last eight.