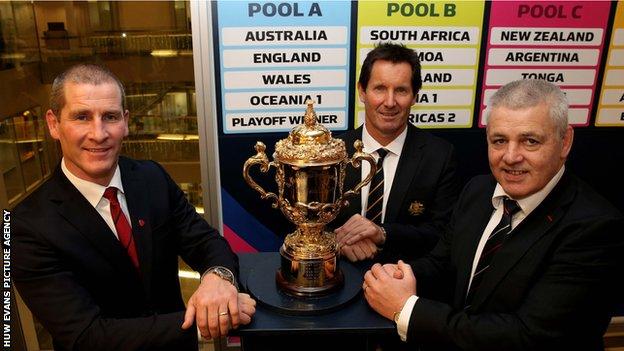 Warren Gatland says Wales will have no fear after being drawn with England and Australia for the 2015 World Cup.

It is the first time that Wales and England, the 2003 world champions, have been drawn in the same World Cup group.

"The tougher the group, the better," said Gatland.

Gatland believes Wales' tough draw could work in his side's favour, as it did in New Zealand in 2011 when they reached the semi-finals after emerging from a pool featuring South Africa, Samoa and Fiji.

After losing their opening match 17-16 to South Africa, Wales won their next four games to reach the last four where they were narrowly beaten 9-8 by France.

The New Zealander had no qualms of Wales being drawn in the 'Pool of Death' for the tournament based in England.

"We put ourselves in this position," said Gatland.

"Our experience of 2011 is that if you come out of a tough group, it sets you up for the quarter-finals and semi-finals."

Gatland pointed to the statistic that every team which has won the World Cup has gone through the tournament unbeaten and he claimed a 'soft' draw had frequently worked against the All Blacks in previous tournaments.

"It is a tough draw for Wales, but after they dropped out of the top eight, it was always going to happen. I don't think Australia and England will be too chuffed with Wales being in their group. Of the three teams though, England will be happier because to play the other teams at home is a huge advantage at a World Cup. And whoever wins the group will probably play Samoa or Scotland in the quarter-finals, as I would expect South Africa to win Pool B. Wales have had a disastrous autumn but you look at England and see how quickly things can turn around with one performance against New Zealand. It makes for an interesting Six Nations now but I don't think it will have any bearing on the World Cup."

"If you look at New Zealand, often they don't get tested enough in the pool stages and teams sometimes field a second [string] side against them, and then they [New Zealand] often come undone," he added.

Wales and England's last World Cup meeting was during the 2003 tournament in Brisbane, when England trailed at half-time before securing a tense quarter-final victory.

The last time England and Australia found themselves in the same pool was at the inaugural World Cup 25 years ago.

Wales were in the third band of countries for the draw, increasing the prospect of a punishing group.

Despite their recent struggles, Wales will be confident they can progress to the quarter-finals, having won two Six Nations titles and Grand Slams during Gatland's reign.

The eight pool places to be filled by qualifiers will be finalised by the end of 2014.