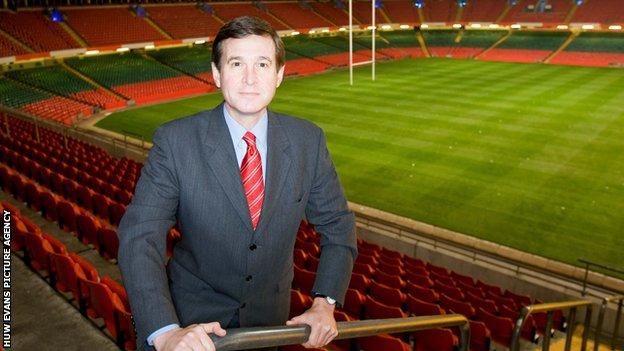 The Welsh Rugby Union wants to stage its 2015 World Cup pool match against host nation England at the Millennium Stadium in Cardiff.

The rivals have been drawn in what many consider to be the toughest 2015 pool.

Roger has invited us, which is very kind of him - I am not going to say one way or the other

The Millennium Stadium is one of 17 venues in England's bid document for the tournament.

"I think they [England] would embrace the opportunity to play in the finest rugby stadium in the world," said WRU group chief executive Roger Lewis.

Tournament organisers England Rugby 2015 are in charge of drawing up the fixture schedule, which will be revealed in March.

It is highly unlikely England will be forced to play Wales at the Millennium Stadium, although the organisers refused to rule out the possibility after Monday's draw, and the hosts may well not have all their pool matches at their home ground of Twickenham.

The England team management can make representations but they have no input into the final decision, nor do the Rugby Football Union, despite being tournament hosts.

Meanwhile, debate has raged over whether Wales should be allowed home advantage for any of their major pool matches, with the Welsh keen to play their group game against two-time world champions Australia, as well as England, at the venue for the 1999 World Cup final.

Debbie Jevans, chief executive of World Cup organisers ER2015, refused to be drawn on the possibility of England playing Wales in Cardiff.

"Roger has invited us, which is very kind of him. I am not going to say one way or the other," she said.

Lewis was keen to stress that the Millennium Stadium was included in the England bid.

"What was pencilled in [for the Millennium Stadium] was eight games and the Welsh government and Cardiff City Council would provide financial support to the tune of £1.4m," he explained.

"The UK treasury supported the underwriting of the competition and of course Wales is still part of the United Kingdom.

"We would be very welcoming hosts. The discussions will now begin.

"I think everything must be up for discussion because the Millennium Stadium is the finest rugby stadium in the world."

In previous World Cups, the host country has played one of its strongest group rivals in the opening game of the tournament. In all bar one (1995 in South Africa) of the seven previous editions, the venue has been the same one used for the final.

If that tradition continues, England could play Wales or Australia in the first match at Twickenham, where as hosts they also opened the 1991 event, losing to New Zealand.

Australia, England and Wales will be joined in Pool A by the Oceania qualifiers - strongly favoured to be Fiji - and the repechage winners.