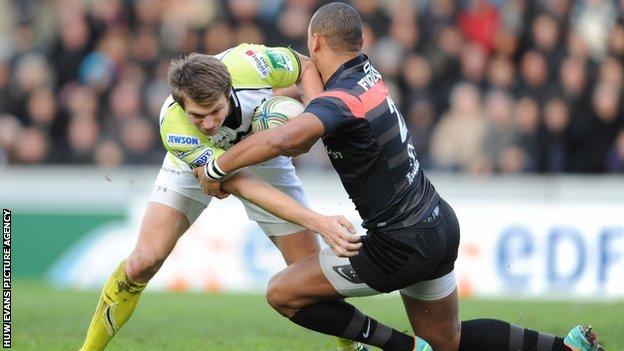 Toulouse battered the battling Ospreys into submission to claim a bonus point win in Pool 2 of the Heineken Cup.

The Welsh region offered brave resistance in the first half, but crumbled after the break.

Kahn Fotouali'i and Ryan Bevington crossed for the Ospreys, who face Toulouse again next week.

Ospreys went into the match shorn of five international front five forwards through injury and were rocked onto their heels as Toulouse started at a terrific pace.

Toulouse pinned the Ospreys back from the start, with powerful interplay among the forwards asking serious questions of the Welsh region's defence.

The Ospreys appeared to have repelled one assault as Biggar just missed an attempted interception. But as they looked on, centre Florian Fritz scooped up the loose ball and ran through some weak tackles from 30 metres to score between the posts. Luke McCallister converted.

Another comedy of errors in the 15th minute saw led to Toulouse's second try, this time captain Yannick Nayanga grabbed a loose tap back from a lineout and run over unopposed in the corner.

Ospreys finally managed to exert some pressure after enduring a tough opening quarter, but wing Eli Walker slipped and was forced into touch.

They were rewarded, however, when a powerful drive by centre Andrew Bishop into the Toulouse 22 resulted in a penalty.

Scrum half Kahn Fotuali'i took a quick tap and nipped in for the try past a static defence. Andrew Biggar converted from in front of the posts.

The first half finished with the Ospreys rampant and the hosts defending desperately, having to force Andrew Bishop into touch at the corner.

Toulouse stepped up the pressure from the restart and put pressure on a creaking Ospreys scrum near the Welsh team's tryline.

The breakthrough finally came in the 56th minute when the impressive Louis Picamoles made ground and fed Luke Burgess who worked Vincent Clerc over at the right corner.

Then Toulouse claimed the bonus point when Picamoles was again the provider for Census Johnson.

Yoann Huget rounded off another sweeping move for the Toulouse fifth try as the Ospreys finally wilted under pressure.

Ryan Bevington crashed over in the corner for a consolation try which Matthew Morgan converted.

But Toulouse had the final word when Jean Marc Doussain slotted a penalty with the last kick of the game.

Ospreys forwards coach Jonathan Humphreys told BBC Radio Wales: "We were happy at half time, but in the second half they exerted a lot of pressure, we had 15 set-pieces inside our own 22.

"The financial implications of it mean that we have to develop our players - I've got James King, Lloyd Peers, Scott Baldwin, Sam Lewis, all these people, you know Ross Jones all coming through our system, playing in their first European rugby against Toulouse out here, off the back of limited preparation.

"We'd be silly not to be proud of it. Will we get the benefits this year? Maybe not. But we will get it long term."