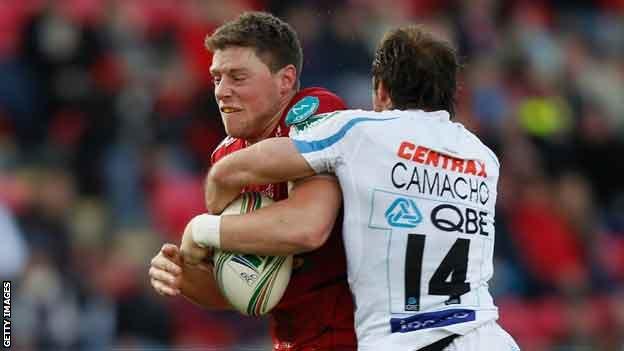 Exeter secured their first Heineken Cup win in a compelling encounter to end the Scarlets' slim hopes of progress.

Haydn Thomas' try and 17 points from Gareth Steenson's boot consigned the hosts to a third successive tournament defeat this season.

The hosts fought back from 16-6 down at the break with a penalty try from a scrum giving them hope.

But the visitors held out against the Scarlets' increasingly desperate late attempts to score.

Wales fly-half Rhys Priestland added to his nation and region's injury worries by being carried off on a stretcher with an Achilles injury soon after the break.

He had already seen Exeter's Fijian centre Sireli Naqelevuki pave the way for the visitors' opening try as the Aviva Premiership club took the game to the hosts.

His powerful burst from deep was followed by a timely offload and Thomas was rewarded for his support run with a clear path to the line.

Steenson converted the fifth-minute try, giving the Chiefs the early momentum that they carried through the opening period, even though they lost try-scorer Thomas to injury early on.

In that time, the visitors put the hosts under telling pressure at the line-out and also enjoyed the better of the scrums.

South African Adriaanse gave the hosts a boost in the set-piece following his introduction.

But Rob Baxter's forwards had the better of their hosts, giving fly-half Steenson the opportunities to kick three penalties as the first-half went on.

Priestland had replied to Thomas' try and added a second penalty before his opposite number ensured Exeter's 16-6 half-time lead.

Steenson added penalties in the 48th and 58th minutes as the visitors continued to pressurise the home defence in their search for a first Heineken Cup win.

Those hopes came into doubt after replacement prop Ben Moon was sin-binned in the 65th minute following persistent scrum offences.

From the next scrum, the Scarlets' increasing power earned a penalty try and replacement fly-half Aled Thomas' conversion put the hosts within a converted try of the lead.

However, the hosts could not make their numerical advantage count amid Exeter's defence and some poor home execution in attack.

"When you give a side the start we did it was always going to be difficult to get back into the game."

Exeter head coach Rob Baxter told BBC Radio Devon: "It's another landmark for us to enjoy and celebrate and it just shows we've taken another little bit of a step forward.

"We really enjoy the Heineken Cup and the guys have trained well this week and they've shown a great attitude.

"Hitting the pitch we had a great intensity and enthusiasm about us and we really went for it.

"We've probably had 10 penalties go our way and there's not a hint of a yellow card, and then we're defending for two minutes and there's yellow cards."