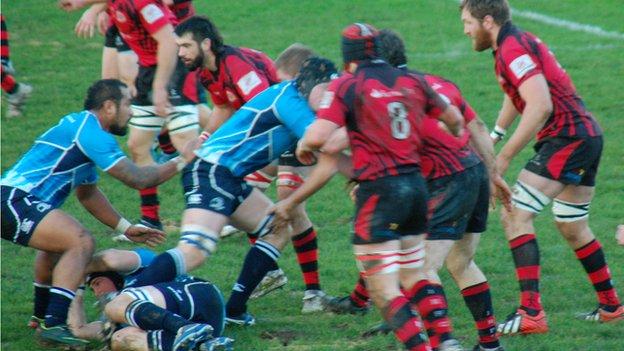 Championship strugglers Jersey let slip a 9-0 lead as they lost to Leinster A in the British and Irish Cup.

Four Michael Le Bourgeois penalties put the islanders 12-6 ahead at the break but they failed to add to their tally in the second-half.

Leo Auva'a and skipper Rhys Ruddock both touched down to give Leinster the lead, as the visitors upped their game.

Flanker Dominic Ryan was sin-binned in stoppage time but despite the extra man Jersey could not find a winning try.

The win means Leinster move three points clear at the top of Pool Five, while Jersey get a losing bonus-point and remain in second spot.

"We didn't hold on to the ball enough in the second half," said Jersey boss Ben Harvey.

"We made a few mistakes but there are lots of positives."

For the second week in a row, Jersey conceded two tries early in the second half, knocking them out of their stride.

The Irish province meanwhile looked more dominant after the interval and were able to throw the ball around with more purpose.

"It could've gone either way, I thought it was a real test.

"We really had to dig in and it was important for us to get the next score at half-time and we did that, which was pleasing."

The other two teams in the group, Pontypridd and Leeds, meet on Sunday.