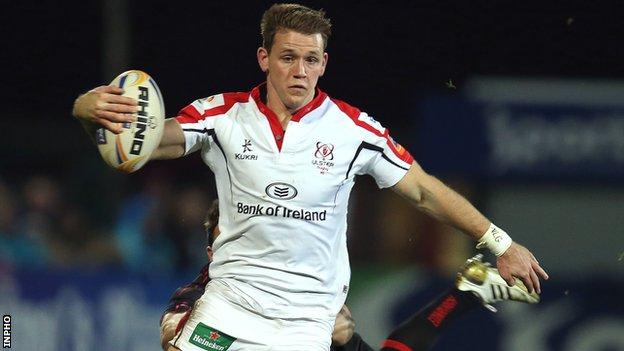 Ireland wing sensation Craig Gilroy has to settle for a place on the Ulster bench for the Heineken Cup game against Northampton at Franklin's Gardens.

Tommy Bowe's return to the right wing sees Andrew Trimble moving to the left at the expense of Gilroy.

Jared Payne, Paddy Wallace, Ruan Pienaar, Rory Best and Tom Court are back in a strong line-up although Stephen Ferris is injured.

Iain Henderson gets the nod ahead of Nick Williams at blind-side flanker.

"There were some difficult decisions but that's what you want," said Ulster coach Mark Anscombe.

"The guys who have missed out this week have been outstandingly positive and that's very pleasing."

"Northampton have a strong pack and they build their game around that. They don't hide from that fact and they're confident in it.

"Their set piece is very strong and we've got to be excited about meeting that front on. We've got to conquer them up front if we're going to compete because you've got to have front foot ball.

"The tight five have to step up and show their qualities, but I'm confident in them, they've all played international rugby."

Ulster will be aiming to continue their remarkable winning streak in Friday's fixture.

So far this season, Anscombe's side have won all 12 of their games which includes Heineken Cup wins over Castres and Glasgow in October.