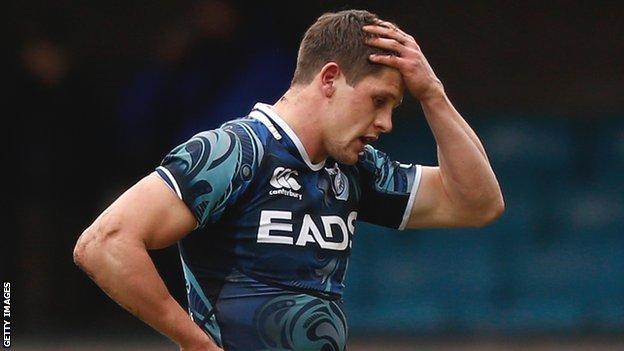 Scrum half Lloyd Williams was sent off as Cardiff Blues crashed to their third defeat in this season's Heineken Cup.

Williams was dismissed in the 25th minute when referee John Lacey adjudged he had tip-tackled Benoit Paillaugue.

Fly-half Rhys Patchell, 19, kicked all the Blues' points with seven penalties and a drop-goal.

It was a third defeat for the Welsh regions in a disappointing weekend of Heineken Cup action, following the Ospreys' 30-14 defeat in Toulouse and the Scarlets' 22-16 home loss to Exeter.

The Welsh regions have managed only one win in nine Heineken Cup pool matches this season.

The Blues suffered a blow before kick-off when Wales captain Sam Warburton withdrew with a chest infection.

They were already without Leigh Halfpenny, Jamie Roberts and Bradley Davies who were all injured on international duty.

But the Blues enjoyed a good start as young fly-half Patchell kicked a penalty from 42 metres, but he fell just short with a second attempt from slightly further shortly afterwards.

Paillaugue drew the French level with a superb penalty before Patchell was again on target for the Blues.

There were worrying signs for the Blues, however, as Montpellier's scrum was getting on top and a Blues infringement gave Paillaugue a simple second penalty.

But it was Patchell who struck next, kicking a penalty from wide on the 22, but the game turned on an incident in the 25th minute.

Scrum-half Paillaugue stole a ball from the base of a Blues scrum and was upended by his opposite number Williams.

Paillaugue had recovered sufficiently to kick the resulting penalty, but the Blues moved back ahead when Patchell dropped a goal.

But the 14 men of the Blues were put under pressure and eventually ran out of tacklers as the French side worked left wing Pierre Berard over in the left hand corner for a try which Paillaugue converted.

Patchell slotted a fourth penalty, but Paillaugue replied in kind to restore the four point advantage at the interval.

The 19-year-old Blues fly-half kicked a monster penalty from inside his own half to give his team a dream start to the second half.

Blues were making a real fist of it, helped by a strengthening wind behind them.

And there was a let-off for the Blues when Berard intercepted a Patchell pass, but was chased down by the fly-half.

It took the French team until the 63rd minute to finally score in the second half as Paillaugue kicked a penalty.

And they finally broke the Blues' resistance when skipper Gorgodze forced his way over from close range two minutes later.

Patchell dragged the Blues back to within three points with two further penalties, but a successful Paillaugue penalty and a late try for substitute wing Nagusa made the game safe for Montpellier.

Blues' director of rugby Phil Davies praised the way his team played after the sending off: "That was tough for us, but fortunately no one was hurt and we just carried on after it I suppose.

"I'm not sure actually [if it was correct decision]. I've just got to have another look at it, their guy finished the game which is important, but we'll just have a little look and see what we'll do with it after.

"The pack fronted up well in all aspects of the game and we had some good ball and Rhys [Patchell] moved the ball nicely, he kicked well for his penalties and he kicked out of hand quite smartly at times.

"It was a good performance by him but a lot of people around him were very instrumental in helping him also, I'm pleased with that maturity really."