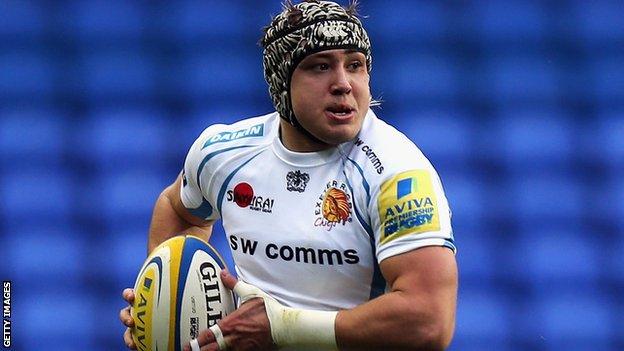 Exeter's Jack Nowell says the serious knee injury that kept him out of action last season was a blessing in disguise.

The 19-year-old ruptured a cruciate ligament in last year's .

"Looking at it in a positive way, it was probably the best thing that could have happened to me.

"It just gave me the time to get everything right, get all parts of my body right and it's definitely paid off now," he told BBC Sport South West.

The England Under-20s full-back had a try disallowed on his .

"I'd like to think I did score, but that would've been the icing on the cake," he added.

"The main thing is that I was out there playing in my first game."

The Chiefs take a break from Premiership action with back-to-back Heineken Cup games against the Scarlets and Nowell is hoping to be involved.

"It would obviously be my first Heineken Cup, I couldn't ask for anything more after a couple of Premiership games.

"I'll just see how it goes, carry on training hard and then if I'm given the chance I'll try and take it."