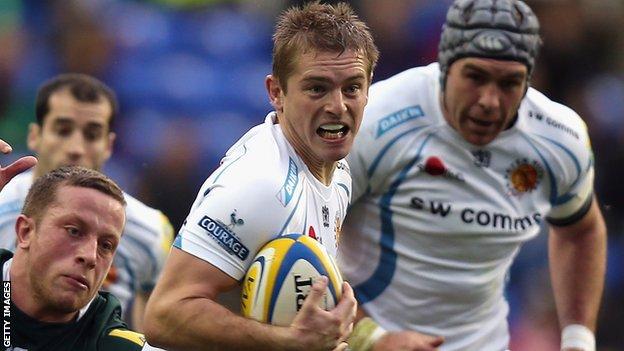 Exeter fly-half Gareth Steenson says his side must win at the Scarlets to progress in the Heineken Cup.

Despite sitting bottom of their Heineken Cup group, Exeter are unbeaten in five games in all competitions.

"If we don't win this weekend then effectively our chances of progressing are gone," he told BBC South West.

"We've got that monkey off our back with the and we're chasing hard to get our first win in the Heineken Cup."

In the opening two Heineken Cup games, and suffered a heavy defeat by

"The trip to Dublin was fantastic and to come away with such a close result was a little disappointing," Steenson said.

"The result against Clermont didn't really reflect how we performed that evening, we took a lot of positives from that game."

The Chiefs travel to Llanelli to face the Scarlets before welcoming them back to Sandy Park seven days later.

Steenson continued: "We've got to go out and get a result this week which gives us something to play for the following week.

"We're not putting pressure on ourselves. It's still only our third game in the Heineken Cup, so it's another learn experience for us and a chance to play a Welsh outfit."