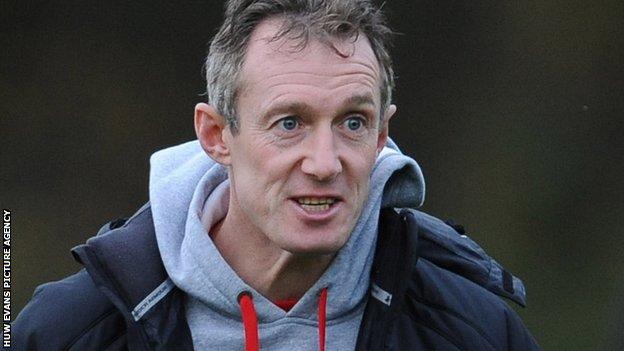 Howley will be in charge while head coach Warren Gatland prepares to lead the Lions in Australia next summer.

Wales have lost five of Howley's six games as caretaker coach but he has been given Lewis's full backing.

"Let's not forget Rob has been part of that team that has delivered us Grand Slams," said Lewis.

Defending champions Wales will go into the Six Nations on the back of seven successive defeats following a disappointing autumn Test series.

Former Wales flanker Martyn Williams believes Howley will need help to guide him through the Six Nations, which begins at home to Ireland on 2 February.

Howley first took charge of Wales against the Barbarians in June after Gatland broke both his heels in an accident in his native New Zealand.

After beating the Baa-Baas, Howley was at the helm for three summer Test matches against Australia, a series which Wales lost 3-0.

He was also in charge for the opening two games in the autumn series against Argentina and Samoa, which ended in Welsh defeats.

Gatland resumed his head coach for the final two games of the series against New Zealand and Australia but will miss the Six Nations to concentrate on his Lions duties.

Shaun Edwards, Robin McBryde and Neil Jenkins will be Howley's assistants during the Six Nations, and Lewis expects a strong Welsh influence to feature in Gatland's backroom team for the Lions.

"It is a fantastic coaching team that I think will be recognised in the weeks to come and they will be going on to do other things," Lewis added.

"There's going to be an announcement in the not too distant future who's going to be in the British and Irish Lions coaching team.

"I think there will be a number of Welsh names in that line-up.

"I don't know yet because it's not announced until next week but I think that will be a tribute to the quality of this Welsh coaching management."