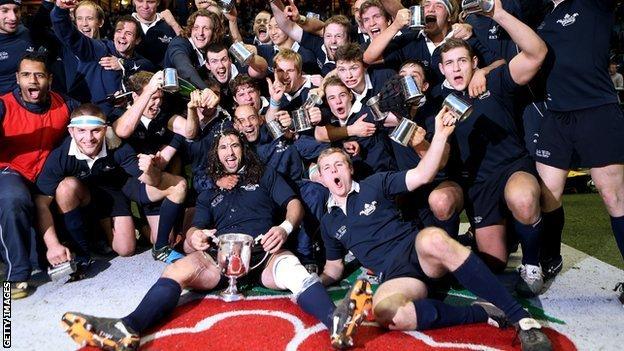 Oxford produced a dramatic second-half comeback to complete a hat-trick of Varsity match victories at Twickenham.

Cambridge dominated the opening 40 minutes taking a 10-point lead into the break through Andy Murdoch's try and 11 points from Rob Stephen's boot.

But Sam Egerton's stunning finish after the break, with Oxford 19-6 down, gave his side a glimmer of hope.

The Dark Blues then took the game to Cambridge and worked further tries from James Harris and Charlie Marr.

The result marks Oxford's first Varsity hat-trick in 11 years and takes their tally of wins to 56, with Cambridge on 61.

The Light Blues started the 131st Varsity clash much the brighter and were 6-0 up inside seven minutes through two Stephen penalties.

After Cassian Bramham-Law missed the chance to pull three points back, Dark Blues skipper John Carter handed their opposition an easy chance to make it 9-0.

Stephen was on song with his third shot at goal but Carter had to leave the field, because of a knee injury, with a quarter of the game gone.

Oxford finally registered from the tee as Gus Jones came on as replacement and eventually gained good field position, in the face of solid Cambridge defence.

Bramham-Law made it 9-6 as both sides introduced more offloading into their game and it paid off for Cambridge when winger Will Smith and Murdoch combined down the right to score four minutes before the break.

Stephen converted to give his side a well deserved 10-point half-time lead.

Cambridge came out with pace and precision and nearly worked Smith in down the left but instead settled for three more from Stephen for a 13-point lead.

Oxford's forwards forced their way back into the game and, after several phases inside their opposition's 22, Egerton span out of one tackle before handing-off a first and then ducking under a second cover tackle to go over.

The try went unconverted but Oxford scored next 10 minutes later when they again produced a multi-phase move.

With full-back Egerton moved up to scrum-half and Charlie Marr on outside him the Dark Blues repeatedly switched the point of attack before Marr's beautiful long pass found flanker, and former Wales sevens star, Harris wide on the left.

Oxford's half-backs combined for their third when Egerton jinked his way round the guard defence at a ruck and sprinted clear to feed Marr.

The fly-half knocked the conversion over in front of the posts to put Oxford ahead for the first time.

Cambridge threatened a comeback but Bramham-Law's 40-metre break gave Oxford the territory from where Marr landed a late penalty to round off the win.