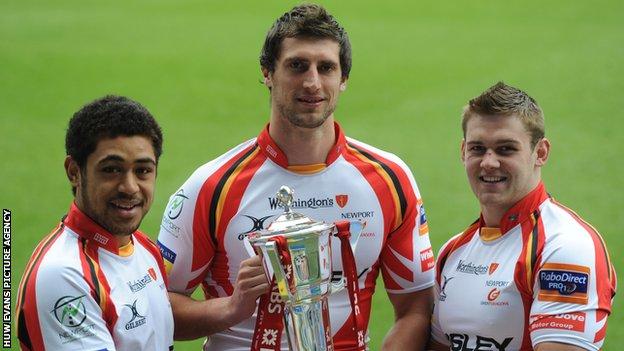 The Dragons have already confirmed that Wales flanker Dan Lydiate will be leaving at the end of this season.

"Fortunately Toby is contracted for next year but I'm sure we will face similar challenges when [he comes] out of contract," said Beale.

"It's what's happening in professional rugby, and it's what's always happened if we are honest, but it is more prevalent at this moment."

The Dragons will be hoping that the formation of the the Professional Regional Game Board (PRGB) will help them keep top players in the future.

PRGB was set up by the Welsh Rugby Union and the four regions to run the game in Wales and one of its key objectives is to try to help retain senior Welsh internationals playing in Wales.

But the formation of PRGB has come too late to attempt to stop Lydiate, the 2012 Six Nations player of the tournament, from moving on.

Lydiate has been linked with a move to French rugby where his former Dragons colleagues Charteris (Perpignan) and Brew (Biarritz) are plying their trade.

Beale, the Dragons director of rugby, paid tribute to Lydiate, who is currently sidelined with an ankle fracture ruling him out of Wales' autumn internationals, and hopes that he will one day return to Rodney Parade.

"In many ways he has put us on the map with his inclusion in the national team together with several other players," said Beale

"Danny has been an ever-present in the Welsh team. I think they have missed him over this autumn as we have we have since his injury. [He's a] huge player for us and for Wales.

"Unfortunately we have had discussions with Danny and he's indicated he will not be taking up a contractual offer from Newport Gwent Dragons next season.

"His reasons were [he] wanted to have a different challenge [and] felt the time was right to do that and we have to understand that. He is a young man with huge potential in front of him.

"We desperately wanted to keep him but unfortunately he has decided otherwise.

"Certainly he is young enough to return to the Dragons in the future and I hope that is the case."