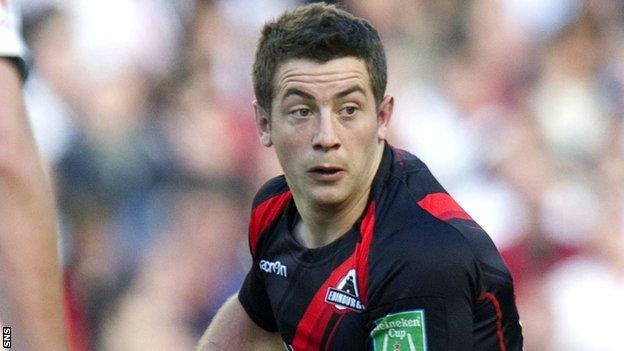 Edinburgh slumped to their third defeat in this season's Heineken Cup, a result which all but ends their involvement in the competition.

Juan Imhoff's try was the highlight of a cagey opening half on which neither side could stamp their authority.

Greig Laidlaw penalties kept Edinburgh in touch, but a try from Eddy Ben Arous gave the French side a 10-point lead.

A Laidlaw penalty reduced the deficit to seven, but a late Maxime Machenaud penalty denied them a bonus point.

In the stadium which hosted the 1924 Olympic Games, Edinburgh were hoping to invoke the spirit of Eric Liddell and ignite a European campaign which had already seen defeats by Saracens and Munster.

And Edinburgh took an early lead through a penalty from the boot of Laidlaw - Edinburgh's first points of the campaign.

Richie Rees broke through the Racing line, but, with the try line approaching, he failed to evade the tackle of Juan Martin Hernandez.

It was a bright start from the visitors and Tim Visser was next to go close, but his cute grubber kick was too powerful and he could not gather.

Matt Scott gave away a penalty for not rolling away from the contact area with Olly Barkley converting the penalty.

The French crowd were irked as the referee gave two penalties Edinburgh's way, but Laidlaw pulled both wide of the posts.

Flying winger Virimi Vakatawa's pace was causing Edinburgh concern, but twice he knocked the ball out of play when breaking.

But the breakthrough came on the other side, when a series of slick passes begun by Barkley ended with Juan Imhoff going over in the corner, with Barkley missing the conversion.

As the half progressed Racing increased the pressure. They failed to deliver another try, although Barkley put another penalty between the sticks.

The game was developing into a cagey affair, with both sides conceding penalties, and Laidlaw converted another just before half-time to keep the visitors in touch.

Edinburgh began the second period with a greater sense of urgency, but struggled to turn pressure into try-scoring chances, although Visser was unfortunate not to catch a Laidlaw crossfield kick on the try-line.

In two spells of pressure on the five-metre line Edinburgh pressed hard on the Racing defence, but the French stood firm until errors ended the attacks.

The position was reversed shortly after as Edinburgh had to defend grimly on their own line, with John Yapp pulling off a try-saving tackle.

Pressure told in the end, though, and after a driving maul, referee Peter Fitzgibbon decided that Ben Arous had touched the ball down.

Laidlaw slotted over a third penalty to raise hopes of picking up a losing bonus point, but Machenaud's late penalty meant the Scots left Paris empty-handed.