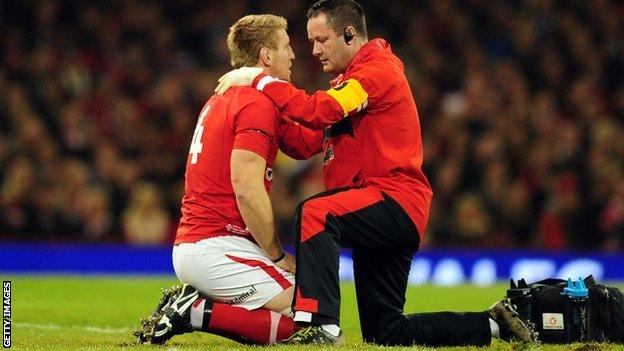 Cardiff Blues lock Bradley Davies has provided Wales with a 2013 Six Nations fillip by being declared fit to face the Scarlets in the Pro12 on Friday.

after being illegally felled by New Zealand hooker Andrew Hore in the All Blacks' 24 November win in Cardiff.

Davies has not played since while Hore was later banned for five weeks over the incident.

Scarlets back-rowers Aaron Shingler and Josh Turnbull are also back in action following recent injuries and could face the Blues.

However, Scarlets hooker Ken Owens (ribs) has joined the list of Wales absentees.

Ospreys star Jones, 31, came off the bench as his side beat Toulouse in the Heineken Cup at the weekend.

The 83-times capped Wales prop damaged his knee in the Ospreys' 39-22 defeat by Leicester in October, ruling him out of Wales' four-Test autumn whitewash.

Three of Jones' Wales tight-head rivals remain on the sidelines.

Wales will go into the Six Nations without Scarlets fly-half Rhys Priestland, whose left Achilles tendon injury makes it unlikely he can earn a place on the 2013 summer tour to Australia.

Priestland underwent surgery after being carried off in the Scarlets' Heineken Cup defeat by Exeter on 8 December.

"It is very disappointing he won't have the chance to play in the Six Nations and put himself into contention for the Lions," Gatland told BBC Sport.

"It is disappointing for him. He is looking at six-to-nine months out."

Flanker Aaron Shingler (groin) was also hurt in the round three loss to Exeter and remains out of action.

Priestland has won 22 Wales caps and was first-choice fly-half during Wales' 2011 World Cup campaign, the 2012 Grand Slam that followed and Wales' autumn series.

Shingler, 25 and with four caps, left the fray in the 63rd minute to join Newport Gwent Dragons' Dan Lydiate and fellow Scarlet Josh Turnbull on the sidelines.

However, Jamie Roberts and Leigh Halfpenny should be fit to face Ireland on 2 February in Wales' opening Six Nations match in Cardiff.

Centre Roberts (elbow) and Halfpenny (neck) should return in mid-January.

Ospreys locks Ian Evans (knee) and will also hoping to prove their fitness for the Ireland clash.