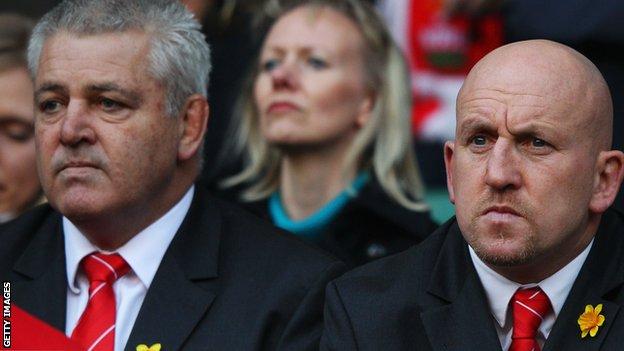 It was an agonising decision to make...but it is something I have to live by

But there is no place for Edwards, who also worked with him at Wasps before their partnership with Wales.

Rowntree and Howley, along with Edwards, worked on the 2009 Lions tour.

But this will be Farrell's first Lions involvement, having overseen after initially turning down the chance to make his 2012 Six Nations role permanent.

Gatland described Farrell's inclusion as "a bit of a selfish appointment" in a team that tour manager Andy Irvine said combined "experience, continuity and some new blood".

"I have heard so much positive feedback about Andy from other coaches and players," Gatland said. "It helps to stimulate me and it is positive in terms of freshening up the coaching team."

Asked about the absence of Edwards, Gatland told BBC Sport: "Obviously he was disappointed. It was an agonising decision to make. But when I looked at the set-up, I wanted continuity from 2009 and the experience that was gained there, but also a bit of freshness.

"The Lions is all about integration and the management party is as important as the players. If Gatland had chosen Edwards as well, it would have been very Welsh-centric. PR-wise it is a good move, and in the short time Andy Farrell has been involved in international rugby, he has had an impact. What you are looking for in a coach is someone who has the drills and application, and commands respect. I think Farrell has that. Edwards has the reputation and Farrell is fast growing one. But the central point is Gatland has chosen what he believes to be the best combination of coaches to be successful."

"Andy comes hugely recommended, he is very well thought of. But that is taking nothing away from Shaun. He is a world-class coach and has been very successful in the role he has. It was a tough decision, but I have made that call and it is something I have to live by."

Gatland also revealed he had spoken to fellow New Zealander Joe Schmidt, the coach who has guided Leinster to their last two Heineken Cup crowns.

"He has done a fantastic job in Ireland," Gatland noted. "There is more than one coach that would have fancied the chance of being on this tour.

"But there are no restrictions and we may add one or two more people to the backroom staff over the coming months if we feel we need to add to the depth and experience there."

Farrell said it was "an honour and privilege to be asked to be a small part of the 125-year history of the Lions."

"I feel very humble to be involved," he added. "As a player or a coach, this is the ultimate."

Forwards expert Rowntree, a member of the England coaching staff since 2007, worked as a scrummaging coach on the 2009 tour to South Africa, where the Lions lost the Test series 2-1.

The former England and Leicester prop also toured with the Lions as a player in 1997 and 2005, and was one of the few coaches to emerge with credit from the leaked review of England's underwhelming quarter-final exit from the 2011 Rugby World Cup.

"With players coming from four countries and different playing styles, it is crucial we find the right blend very quickly," Rowntree said. "They have to get to know each other on the field, and, importantly, off it as well and build up that camaraderie."

Former scrum-half Howley, a Lion in 1997 and 2001, has stepped in as Wales' caretaker coach on last summer's tour to Australia and for the first two matches of this autumn's series, losing five of his six games in charge.

"When you look at the talent we have got at our disposal, and the style we want to play with the Lions, the greatest thing about being part of the coaching team is facilitating talented players," Howley said.

Scotland team doctor James Robson was also confirmed as a member of the Lions staff for a sixth successive tour, following his initial appointment for the 1993 tour to New Zealand.

"The entire management team is delighted that James is on board once again," said Lions tour manager Andy Irvine. "His extensive experience of all things 'Lions' is invaluable, and his knowledge of player management in terms of welfare and medical assistance is second to none."

The Lions will play the Barbarians in Hong Kong on Saturday 1 June before taking on Western Force in their opening match in Australia four days later, while the first Test of the 10-match tour is on 22 June in Brisbane.