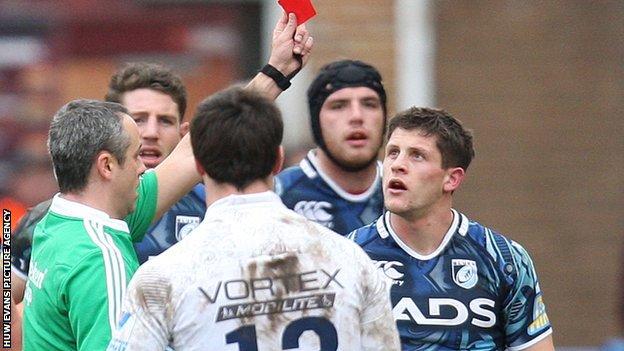 The duo learned their fates after an European Rugby Cup (ERC) disciplinary hearing in Dublin.

Williams was sent off in the Blues' Heineken Cup match with Montpellier, and is available from 14 January, 2013.

Groves can play again after Monday, 24 December after his red card in the Dragons' Amlin Cup win in Mogliano.

They were found guilt of contravening the International Rugby Board's Law 10.4(j): liifting a player from the ground and either dropping or driving that player's head and/or upper body into the ground whilst the player's feet were off the ground.

Williams, 23 and capped eight times, was banished after 25 minutes following a tackle on opposite number Benoit Paillaugue at the Arms Park. The French side went on to win 35-24.

The half-back's ban means he will miss the Blues' return clash at Montpellier on Saturday, and their next pool match away to Toulon on the weekend of 12/13 January, leaving him only one more opportunity - the Blues' final pool game against Sale - to press his case for inclusion in Wales' Six Nations squad.

Jevons was given his marching orders in the 30th minute, but his side managed to overcome their Italian hosts 0-33.

He will miss the return encounter on Sunday, but is free for the Dragons' trip to the Arms Park.