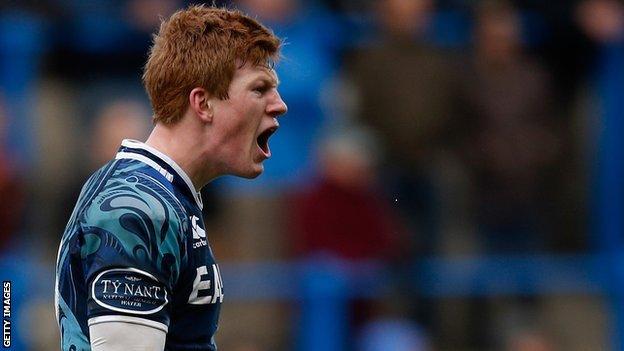 Teenage Cardiff Blues fly-half Rhys Patchell has played down his chances of being called up to Wales' Six Nations squad in the New Year.

The 19-year-old has impressed on his debut season at senior level.

His form continued in the Blues' 35-24 Heineken Cup defeat by Montpellier, which came a day after Wales fly-half Rhys Priestland damaged his Achilles.

But the 6ft 3in Blues academy product said: "If in two or three years a Welsh call up comes along, that's great."

Patchell has made nine Blues appearances and has underlined his versatility by playing full-back as well as at stand-off.

Against Montpellier, he and his team-mates had to contend with playing most of the game with 14 men after scrum-half Lloyd Williams was sent off in the 25th minute for a tip tackle.

Patchell kept his side in touch seven penalties and a drop-goal, but when asked by BBC Radio Wales if he felt he is a contender for Wales in the 2013 Six Nations, he replied: "I wouldn't have said that.

"I mean I'm very young and the big focus we've got at the Blues this year is that if you play well for the Blue shirt you may get a call-up for the red shirt.

"But I'm thoroughly enjoying myself at the Blues and the challenge for me is to get better and better week-on-week.

"And if in two or three years a Welsh call up comes along, that's great.

"But for the time being I'm fully focused and I'm enjoying myself at the Blues."

If Priestland's injury rules him out of the Six Nations, Wales could turn to Perpignan pivot James Hook or his former Ospreys team-mate Dan Bigger.

Another Osprey, Matthew Morgan, could also be a Wales fly-half contender.

Blues director of rugby, Phil Davies, said Patchell is showing great maturity and has "all the ingredients to be a top player".

"His rugby's doing the talking for him and it's a case of we've just got to look after our players," he said.