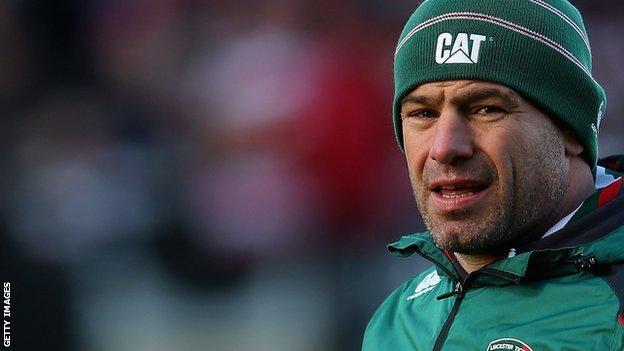 Director of rugby Richard Cockerill says Leicester's poor second-half display in the 33-25 Heineken Cup win over Treviso will serve as a warning for Saturday's return fixture in Italy.

Tigers dominated the first half and eased into a 26-7 lead.

We have not had large chunks of our squad for four or five weeks, so to bring it all back seamlessly is difficult

But Cockerill told Radio Leicester: "We were poor and inaccurate in the second half. But it's job done.

"We certainly won't be over-confident next week. If there was any complacency it's certainly been shaken out of us."

Tigers lost to Toulouse in France but can still top the table if they win all their remaining fixtures - starting with the game against Treviso at Welford Road next weekend.

Cockerill did rest several of his star names during the second half of last weekend's win over Treviso, however the Tigers boss knows they must improve.

He said: "We played some good stuff in the first half and probably should have scored some more points but there was only eight points in the game in the end, so it was a lot closer than we would have wanted.

"We took guys off where we could as early as we could, but the second-half performance was not where we wanted it to be.

"Treviso will want to put on a big performance at home and put out there best side. It's always been hard there and we have to better. This in some ways is not bad for us. They played really well.

"There is no point in getting too animated. It gives us an opportunity to regroup. We have not had large chunks of our squad for four or five weeks, so to bring it all back seamlessly is difficult.

"We have to be a lot better than we were in the second half. The players know it wasn't good enough. But we are in good shape."