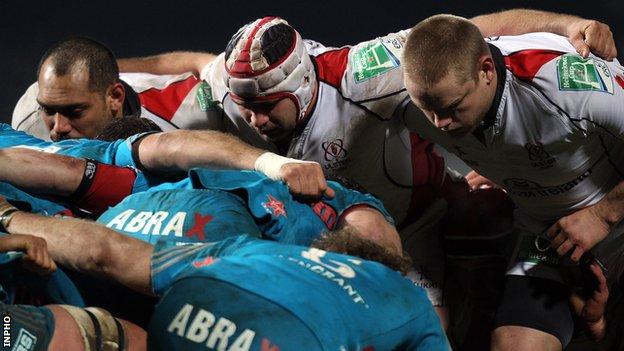 Ulster prop John Afoa has heaped praise on the contribution of his front-row colleague Tom Court to the Irish province's stunning season to date.

A difficult international season in 2012 has seen Court fall out of favour with Ireland coach Declan Kidney but Afoa says the Australian native has "built in confidence" again.

"He's come back and he's sort of got a new lease of life," said Afoa.

"The new rule with two props now on the bench has been a load off his mind."

Court suffered a chastening experience when he came off the bench to fill his more unaccustomed tight-head role in an Ireland scrum under fierce pressure in the Six Nations clash against England in March.

However, the rules now provide for tight-head and loose-head specialists to be included in the replacements and Afoa believes this is benefiting Court's game - even though his versatility has helped earn him 29 Ireland caps.

"He can concentrate on his loose-head," added Afoa.

"When he went to those internationals, he was trying to juggle both positions.

"It wasn't his fault they (Ireland) didn't have a player that could do both so it fell on him.

"The job he did at the weekend against Northampton really showed what he is putting in for us."

"They stepped up and performed. That's what we expect and hope of them and they did that," said Anscombe.

The Ulster coach added that the display of fit-again Best "reminded the British Lions that he's about and not to be forgotten".

"Rory Best is back to what everyone knows of him."

However, the New Zealander insists that the front-row trio and their team-mates will have to do it all again in Saturday's return game against the Saints.

"They have some quality players and some of those players didn't play to the top of their potential on Friday.

"They will be stronger and more abrasive this weekend.

"But while they may change aspects of their game, they are still going to bring a forwards confrontational game.

"I'm expecting a tougher game than last week. But if you are going to be successful in this competition, you've got to be consistent.

"Each team has good days but good teams back them up."

Anscombe acknowledged that he is unlikely to tinker with selection in a major way from last Friday's win.

However, with captain Johann Muller ruled out for two months by a broken arm, he will have to make one enforced change.

Iain Henderson looks likely to switch from flanker to lock with Nick Williams drafted into the back row.