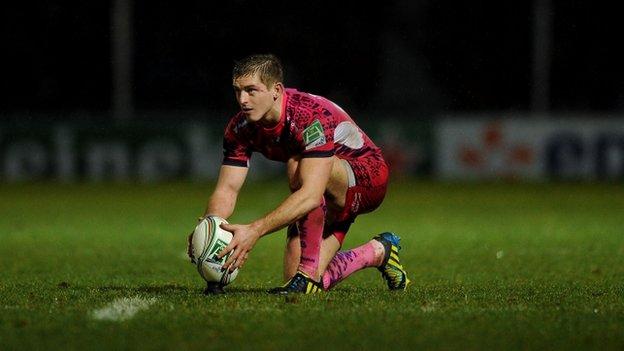 But Gareth Steenson kicked his third penalty of the match on 61 minutes to put Exeter ahead again.

And captain James Scaysbrook crossed in the dying seconds of the game to make sure of victory.

The win keeps Exeter's hopes alive of at least progressing to the latter stages of the Amlin Challenge Cup.

Tries by Ian Whitten and Simon Alcott had helped put the home side in control - Whitten helping to support a break by winger Jack Nowell to cross while hooker Alcott took advantage after Aled Thomas had a clearance kick charged down.

But Scarlets hit back and Ken Owens went over just before the break while Scott Williams crossed and Aled Thomas's conversion levelled it.

Exeter finally got back into the game and their pack exerted the pressure at a series of scrums in front of the posts. After a number of resets, the Scarlets were penalised for standing up and Steenson's simple penalty nudged his side back in front.

Exeter went in search of another try in the final minutes and Scaysbrook went over under the posts before Steenson added the extras to complete the scoring.

Exeter head coach Rob Baxter: "We got off to a flying start playing some good pressure rugby, good hard carries, good positional kicking, pressure in the set piece and pressuring their kickers.

"We got in some good positions which we got one very good try from and from pressure we created a second.

"We were on form then and playing to a very strong game plan but then went a little off plan, but we tend to do that when we get a lead and get excited."

Scarlets head coach Simon Easterby: "The game got away from us in the opening 20 minutes and you can't give any team two soft tries but that is what we did.

"The charge down was one which they didn't have to work for and then they scored off a set piece.

"When you gift them 12 points in the first half then it is always going to be an uphill struggle, and we did that last week as well when they got into an early lead."