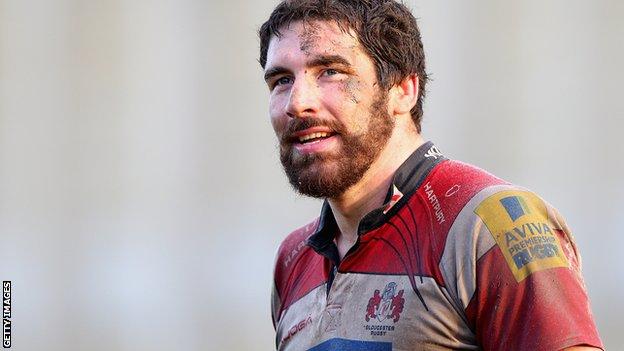 Gloucester captain Jim Hamilton is to leave Kingsholm for an unnamed French Top 14 club at the end of the season.

The Scotland international, 30, had been linked with both Montpellier and Racing Metro in recent weeks.

The second-row forward was contracted at Kingsholm until 2014 and Gloucester have confirmed they will receive compensation from the buying club.

The offer is significant, and it would be wrong of us to try to stand in Jim's way.

With no salary cap in the Top 14, the former Leicester and Edinburgh player would be likely to increase his wage.

And director of rugby Nigel Davies said: "It's a fact of life in the modern game that the French sides currently have much bigger playing budgets than their English counterparts.

"Jim is a fine player, an experienced international and has been a big part of what we've achieved so far this season at Gloucester Rugby.

"However, the offer is significant, and it would be wrong of us to try to stand in Jim's way. It's a massive opportunity for him. We don't want to lose him and he's aware of that.

"We're not the first team to lose a player this way, and we won't be the last."

Hamilton came through Leicester's academy and made 64 first-team appearances before joining Edinburgh then Gloucester.

Crossing the Channel in 2012

Now club captain, he has played 50 times in three seasons for the Cherry and Whites.

Meanwhile, Gloucester have announced the arrival of Tonga international Lua Lokotui on an 18-month contract.

The 32-year-old lock has previously played for Stade Francais and has also had spells in Japan and New Zealand.

"We've effectively been a man down since Alex Brown injured his shoulder in the opening game of the season," added Davies.

"Jim Hamilton and Will James have been superb, and Tom Savage has done a great job there when required.

"But, with Elliott Stooke also currently injured, we did need to bring someone else in. Another injury would have left us seriously stretched.

"We've taken our time and made sure that we're bringing in someone who will add to what we already have, on and off the field."