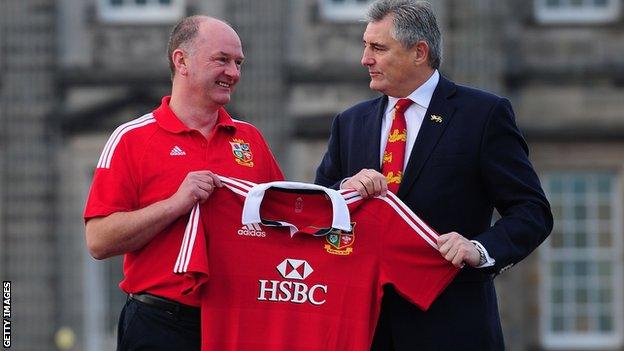 British and Irish Lions tour manager Andy Irvine has stressed the importance of a good Six Nations campaign for Scotland players with an eye on next year's Australia tour.

"In 2009, Scotland had a super autumn series and there was probably a lot of players pencilled in for that tour," said former full-back Irvine.

"They then had a poor Six Nations and a lot of those chances evaporated.

"I would hope that this time it might be the opposite."

We can all on our day be those world beaters, it's just about getting that collective spot on every game

That leaves Irvine and team doctor James Robson flying the flag for Scotland at the moment.

Ian McGeechan selected just two fellow-Scots when naming his original squad for the 2009 tour of South Africa, the lowest ever representation.

And the chances of increased numbers this time round have not been helped by recent form.

Scotland were whitewashed in this year's Six Nations, having failed to reach the knock-out phase of the World Cup.

There was a brief glimmer of hope when the summer tour yielded wins in Australia, Fiji and Samoa but head coach Andy Robinson resigned after defeats to New Zealand, South Africa and Tonga in November.

Speaking in September, Gatland told BBC Scotland: "I think it's important that we have a representation from the four nations and I think that gives a good balance to the team."

However, Scotland and Wales are at a low ebb after poor results.

"So the Six Nations is going to be very important, particularly for some of those players with mixed experience and the fringe players that really want to put their hands up to put themselves into contention."

Experienced winger Sean Lamont maintains Scotland are capable of responding from the lows of the autumn by winning the Six Nations.

Despite slipping to 12th in the world rankings, Lamont takes confidence from inner belief and witnessing how Stuart Lancaster transformed England into a side which ended the All Blacks' 20-Test unbeaten run.

"I'd like to win it [the Six Nations], he said. "For Scotland to win it we need to be clinical in every game and flawless.

"We can do it, as we've shown against the big teams. We can all on our day be those world-beaters, it's just about getting that collective spot-on every game.

"But the rollercoaster ride of performances needs to go.

"We've got England first up, who will be on great form because they had a great win against New Zealand and they've got a good team together.

"A change of coach is always an uncertain time, but it doesn't mean it can't be done. Lancaster came in and has turned it round. It can be done."