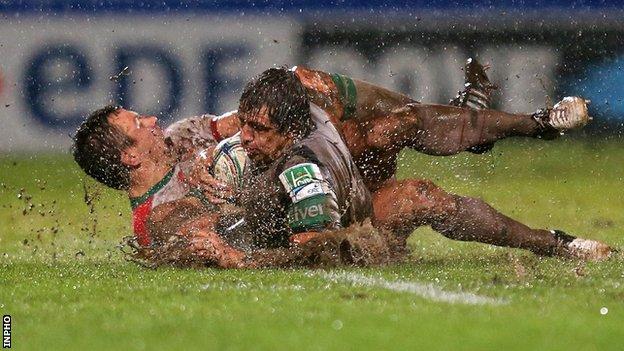 Biarritz kept alive their faint hopes of qualification for Heineken Cup quarter-finals as they beat Connacht at a sodden Parc des Sports Aguilera.

The French club dominated possession and Connacht never threatened the Biarritz line in the contest.

Connacht defended gamely in the rain-lashed conditions before Seremaia Burotu's late try for the home side.

By the end of the game, the players looked as if they had been taking part in a bog snorkelling contest, such were their muddied appearances.

Heavy rain in the south west of France had put the contest in doubt and the game started with pools of water already on the pitch.

Johnny O'Connor's inclusion was Connacht's only change from last weekend's win and he was guilty of conceding a third-minute penalty as he illegally dispossessed fit-again Imanol Harinordoquy, which allowed Yachvili to score from in front of the posts.

As Biarritz continued to press, winger Takudzwa Ngwenya appeared to have scored in the 12th minute but the video correctly showed that he had not grounded before skidding off the saturated pitch.

Connacht were being forced to soak up constant pressure and Parks' positioning in the number 13 channel meant that he was struggling to get any distance with his clearance kicks.

Biarritz's pressure finally yielded a try for the impressive Balshaw in the 31st minute after quick hands from Jean Pascal Barraque and Damien Traille as the Top 14 club had numbers out wide, with Parks caught out in defence.

Yachvili added the conversion but missed a further penalty chance before the break as Connacht were probably relieved to only be 10-0 in arrears.

After Benoit August was yellow carded for some illegal handling on the floor on 47 minutes, Parks had a chance to open Connacht's account from 40 metres but in the dreadful kicking conditions the former Scotland international was off target.

An injury to Connacht's South African centre Danie Poolman led to a long delay as he had to be stretchered off the field after taking an accidental knee to the head in a ruck.

As some Biarritz frustration started to set in, replacement Thibault Dubarry was sin-binned by referee Leighton Hodges after tangling with Leinster-bound Mike McCarthy.

But once again Connacht were unable to profit from the man advantage and Biarritz replacement Burotu scored in the final minute after Traille's chip and chase, with man of the match Yachvili slotting a superb conversion.