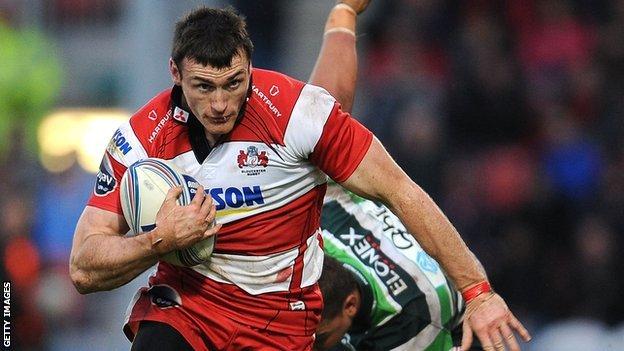 Shane Monahan ran in four tries as Gloucester thrashed London Irish to move seven points clear at the top of Pool One of the Amlin Challenge Cup.

Rob Cook extended the lead before Monahan completed his hat-trick to secure a bonus point.

Monahan crossed for a fourth time before Dan Robson completed the rout.

It leaves Gloucester with their destiny in their own hands going into their final two pool matches against Mont de Marsan and Bordeaux-Begles early in the new year.

But, after this heavy defeat, the Exiles, who are second in the pool, will need to win both their remaining games against the two French teams and hope Gloucester slip up to stand a chance of pipping them to a place in the quarter-finals.

"I still think there is a lot in the tank for this side, but the good thing is we have momentum, we're going in the right direction and we'll enjoy the moment while it lasts.

"Monahan has been a threat and dangerous all season, he's stepped up very well from the Championship.

"We're still work in progress and there is still some way to go before we see the best out of this side.

"We still have a few injuries to star players and the guys stepping up for us week-in, week-out are doing fantastically well and their growing into the game."