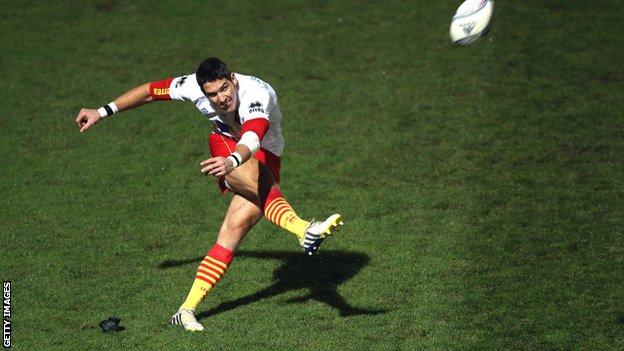 Richard Haughton pounced on a Worcester mix-up to cross for the game's only try, Hook converting before adding two penalties to put the hosts 13-3 up.

The second of two Andy Goode penalties 10 minutes into the second half got Worcester to within a converted score.

But, although the Warriors collected a losing bonus point, they are now second favourites to reach the quarter-finals.

The two sides are now level on 15 points at the top of Pool Two, with only the group winners progressing to the last eight.

But, due to Perpignan's superior try-scoring record in the two meetings between the top teams in the pool over the last week, the Catalan outfit now look on course to progress.

It might have been even worse for the Warriors, who nearly missed out on a bonus point. But Wales international Hook missed another kickable penalty in the closing stages.

Perpignan gained revenge for last weekend's in which Goode registered all of Worcester's points.

"We should have won that game, but we lost it in the first quarter of an hour when we we gave them some points and squandered some good scoring chances.

"But we still performed really well with a huge amount of heart and effort.

"There will the be teams like the Toulons and the Toulouses and the Montpelliers will all lose here."