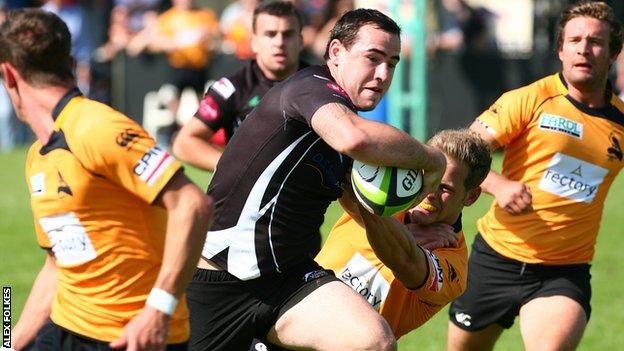 Launceston back Lewis Paterson is in talks over a potential move to Championship side Plymouth Albion.

The 22-year-old has been in fine form for the Cornish All Blacks this season, scoring nine tries.

"I want to commit myself to rugby and give it a shot," Paterson told BBC South West Sport.

"I got in touch with James Owen and he said I was in their thoughts. It's early days but Nat [Saumi] has been speaking with Launceston about me."

The former Ivybridge College pupil is in his second spell with Launceston having joined in 2008.

Paterson spent a season in Munster playing for Old Crescent but returned to finish his degree at Marjons after breaking his leg.

The hard-running centre scored ten tries after re-signing for the Cornish All Blacks last season, and started this year with a

"Albion have always known about me from my time at Marjons but to hear that they rate me is a big boost," he added.

"I'd love a chance to play in the Championship but I'm just focused on knuckling down, training hard and playing well for Launceston at the moment.

"I'm ambitious and this has given me a target, a new goal. If I can keep playing well then there may be something for me at the end.

"If I keep putting in good performances an opportunity may come my way."