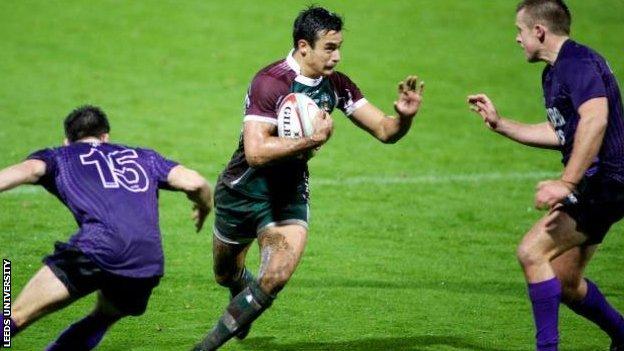 Leeds Carnegie's trip to Pontypridd in the British and Irish Cup might not be one of the stand-out fixtures in the sporting schedule this weekend.

But for 19-year-old Alex Lozowski, son of former England and Wasps centre Rob, it will mark the culmination of a period in his life that has seen him go from Chelsea's Academy to Championship rugby union.

Released by the European champions at the age of 16, he is now preparing to make his debut in a totally different ball game.

"I always loved football when I was young and ended up signing for Chelsea when I was 10 and staying there for six years," he told BBC Radio Leeds.

"When I first arrived it was just before Roman Abramovich came in and I saw the benefits of that investment. It was the best around.

"Anything you wanted you got and they looked after you really well. It was a great environment to be in."

The teenager, who now combines his burgeoning rugby union career with studying for an economics degree at Leeds University, was part of the same Chelsea youth team as England Under-21 midfielder Josh McEachran, who is on loan at Middlesbrough from the Blues.

However, Lozowski is not the only member of that particular side to turn his back on football in pursuit of a career in another sport.

Other sportsmen who have made a change

Adam Gemili, world junior 100m champion and semi-finalist at the 2012 Olympics in the same event, is another alumnus of Lozowski's side.

"Even back then you could tell how fast he was and fair play to him for what he has done. Hopefully he can get an Olympic medal next time out," he continued.

Having left the Premier League giants at 16, Lozowski quickly turned his attentions to the oval ball and, despite suffering a broken leg while with the Wasps Academy, he has not looked back.

The full-back admits that the opportunity to continue his education played a part in his decision.

"When I was 14 they were talking about wanting us to have days off school and it was a tough call at that time. My school and parents thought it would be for the best to stick with my education," he added.

"When Chelsea finished I just thought I'd try something new and I'd played a bit of rugby when I was at school.

"I actually considered getting back into football when I came to university but all of my mates here were playing rugby so I stuck with that and I'm glad I did."

The day after Lozowski makes his bow for Carnegie his former side face Corinthians in the Club World Cup final in Yokohama.

It is a long way from South Wales to Japan but he has no regrets over his career change.

"I've never looked back, it didn't work out at Chelsea and that's fine," he concluded.

"I'm at university and it is good to have the balance of making sure you have options after sport at the same time as competing."