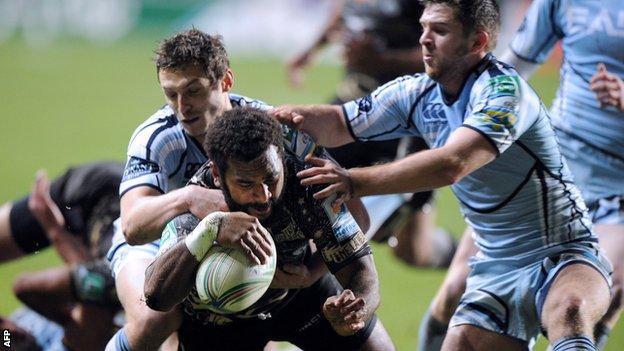 Cardiff Blues fell to a fourth consecutive Heineken Cup loss despite a gutsy performance against Montpellier, who secured a bonus-point win.

The Welsh side were leading 8-3 early on following Sam Warburton's try and a Rhys Patchell penalty.

The French side responded with tries from Timoci Nagusa, Rassie van Vuuren and Yohan Audrin.

Alex Cuthbert hit back but Johnnie Beattie sealed the victory and bonus point with his touchdown on 58 minutes.

Victory keeps Montpellier's Heineken Cup hopes alive but the Blues, who had lost at home to the French side last Sunday, remain rooted at the bottom of Pool 6.

The Welsh side were forced to make two late changes with both Lou Reed, who did not play following the death of his father, and Marc Breze dropping out of the squad. Macauley Cook replaced Reed

Rhys Patchell missed an early shot at goal but Warburton pounced for an opportunist try with just four minutes on the clock.

From a five-metre lineout Van Vuuren missed his man, with the ball falling to the Wales captain to dive over.

Patchell was again off target with the conversion and Martin Bustos Moyano responded with his side's first points to bring the hosts within two points.

The 19-year-old fly-half restored the Blues' cushion but Montpellier began to take control of the encounter.

Only some superb defence from Cuthbert forced Nagusa to touch down out of play following a sweeping backs move, but the Fijian quickly got his try.

The attacker was tackled but not held by Gavin Evans and jumped back up to race over. Bustos Moyano slotted the conversion and the French outfit turned the screw on their rivals.

Patchell fired a long-range penalty wide and Nagusa launched a scintillating counter-attack which provided the platform for Montpellier to manufacture their second try.

The Welsh region hung on following a succession of five-metre scrums but the pressure eventually told. Van Vuuren was the beneficiary, as he pivoted at the back of a ruck to twist out of Andries Pretorius' tackle to score.

Bustos Moyano added the extras to establish a 17-8 lead, which Montpellier hung onto at the interval.

The French team came out flying in the second half and it took them just one minute to get the scoreboard ticking once again.

They launched a sustained period of pressure and Audrin eventually pounced through Patchell and Josh Navidi to score. Bustos Moyano added the conversion to establish a 16-point lead.

But the Blues fought back and full-back Jason Tovey came close to snatching a try from a superb chip and chase and soon after Cuthbert burst clear, the Wales wing bumping off Santiago Fernandez and racing away in the 51st minute.

Cardiff Blues director of rugby Phil Davies: "It really wasn't easy out there but we showed a lot of spirit and a lot of pride.

"They are a top side with a massive pack of forwards. But the pleasing thing for us is that we stuck at it.

"We looked pretty competent at the scrum, we pinched a coupe of lineout balls off them and won our own balls. Generally there's a lot of things to be pleased with.

"The frustration that we are feeling at the moment will fuel our fire to get some victories. We have a game plan, it's developing and we just need a few wins."