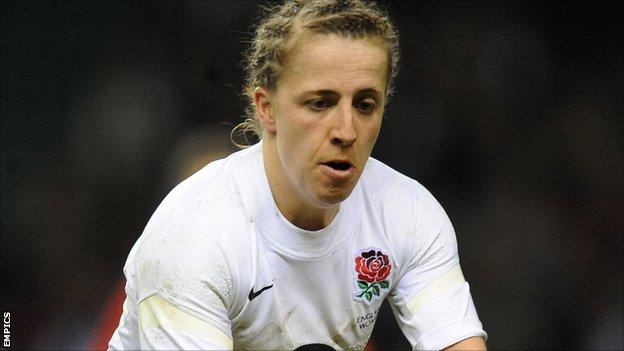 While the men's squad recuperated before returning to their professional clubs, the 26-year-old was straight back into the thick of the 'day job'.

For McLean, Twickenham and the intimidating force of the reigning world champions has been replaced by the classroom and pupils of the reception class she teaches in Sunderland.

"I'm really lucky, the school are amazing. The support I get from people I work with, the kids and everybody is fantastic," McLean told BBC North East & Cumbria Sport.

"We got there and because we were playing after the men, we didn't see their game as we were getting ready.

"As much as we wanted to enjoy it, there was expectation so a lot of the enjoyment was after the game.

"It was a case of sitting at work a few days later and thinking - 'Wow, we were there a few days ago'.

"It was such a big thing, the fans stayed around and there was a great atmosphere, a buzz.

"It was great, singing the national anthem, the flames as we ran out but it wasn't something we were used to.

"Once the whistle blows you just get completely oblivious, you're focused on what you're doing."

"Getting up early was the worst thing, I had spent the last 10 days being told what to wear, what to do, and basically you've just got to follow somebody in the same colour t-shirt.

"When I got up on the Monday morning I thought - what am I going to wear? I've got to be in charge of 30 kids.

"The first week was a bit long and hard, but the kids are lovely and it's nice to be back in normality having been caught in a little bubble."

McLean, a half-back who plays club rugby for Darlington Mowden Park, was influential throughout the 3-0 series whitewash, directing the play for Gary Street's side at number 10.

However, the physical fatigue caused by 10 days away 'on camp', strict diets, training and an afternoon at Twickenham against the fiercely physical tourists posed different problems back in the 'real world'.

"Sitting on the little chairs in reception class hurt a little bit more on the Monday morning, trying to get up and down, I was having to ask the kids to go and get me things," she said.

"It's part and parcel of what we do, you just adjust to whatever the job is and it's something you get used to."

England's success has led to greater exposure for McLean and her team-mates, with local and national media featuring her personal progress as captain.

Her development as a player earned a in 2011.

"My class is four and five year olds, so when I last went to play one of the parents asked me how it had been to play in Russia, when we'd just been in London, so you can imagine some of the stories that are passed back of what I do," McLean added.

"If we can get more women into sport, to show it's not just for boys, and something like rugby which is male-orientated, it's good for girls to see.

"Rugby is such an inclusive sport, you look at body types and shapes and there's a part for everybody, and definitely we want to spread that message a bit more.

"We want to spread that positive message in sport, it's really important."

England's male side ended their Autumn series at Twickenham with victory against the All Blacks before the women's side followed suit, and the Rugby Football Union has been keen to link the men's and women's sides as a sporting brand.

Current internationals Alex Corbisiero, and Danny Care expressed their approval on social media, as did former players Matt Dawson and Will Carling, their contributions also boosting the profile of the women's game.

"I've met Chris [Robshaw - England captain] a couple of times at publicity events and the boys are really supportive about it," McLean continued.

"Because they are professionals they have a lot of coverage and anything they do gives credit to our game.

"It's a great message because Stuart Lancaster has come in and talked about 'England Connected' which isn't just a buzzword that is chucked about, it's actually got thought behind it.

"The men come and watch the games, tweet about it and it makes a massive difference."