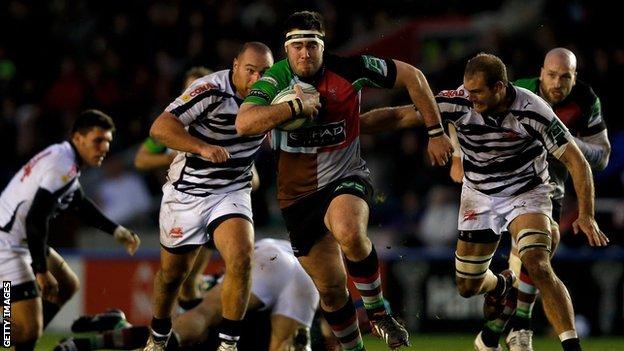 Harlequins demolished Italian side Zebre to move closer to a place in the Heineken Cup quarter-finals.

The home side took time to get on top, but took full control after two Zebre yellow cards in quick succession.

The bonus-point win means Quins need only one more point from their remaining two games to secure a place in the last eight.

The hosts, with Chris Robshaw and Uge Monye back after missing last week's 57-14 win in Italy, took an early lead through an Evans penalty, with the fly-half then chipping through for Tom Casson to collect and cross the line.

Quins were frustrated as Ruggero Trevisan crossed to get the visitors on the board, but the Premiership champions were back on their way with a penalty try as the Zebre scrum went backwards after Daniel Halangahu had seen a yellow card.

From there, it was one way traffic, with replacement Ben Botica going over and Tom Guest being fed from a maul to dive in either side of Gonzalo Garcia being sent to the sin bin for deliberate offside.

Sam Smith finished off a flowing move for the fifth score, with Danny Care taking on a 40-metre run for Quins' sixth try.

Zebre's miserable afternoon was complete as flanker Filippo Ferrarini became the third visiting player to be sent to the sin bin before Karl Dickson went over for Quins' final score.

Harlequins director of rugby Conor O'Shea: "We were imprecise and made mistakes but it was ultimately a job well done.

"We scored over 50 points in each of the two games against them. Before we first played them I read out their scores to our players and it showed that after 55 minutes of each game they had been in contention so they take some breaking down.

"We want to be at home in the quarter-final in April. People say that we are stuttering along but we've won 13 out of 16 in all competitions."