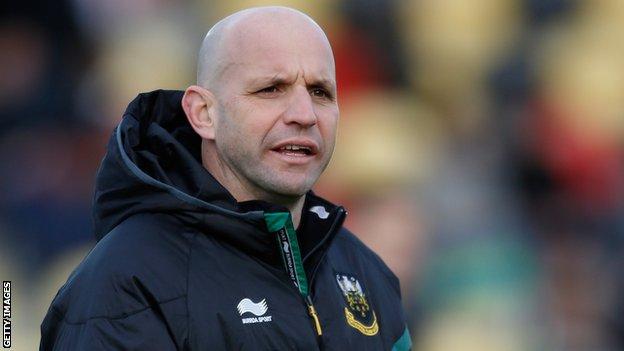 Northampton boss Jim Mallinder says the Heineken Cup win at Ulster must "set the standard" for his side from now on.

Saints inflicted a first defeat of the season on Ulster in a 10-9 win at Ravenhill, which followed the Irish side's 25-6 win at Franklin's Gardens.

Mallinder told BBC Radio Northampton: "We got quite a lot of criticism and I guess quite rightly.

"But it's showed us how we can play and we've got to make sure the bar remains very high."

Mallinder added: "You have highs and lows but particularly on the back of last week's spanking, where we really did come a distant second, it was very pleasing.

"We knew we were still a talented side and we were determined to come and show what we could do.

"I'd guess that massive win against us didn't help them - you read in the press very positive things about everything that's good about Ulster and sometimes that can backfire on you."

Third-placed Saints' hopes of qualifying for the quarter-finals remain alive as long as they overcome Castres, who are two points above them, in their penultimate match.

Mallinder's side complete their Pool 4 campaign with a trip to Glasgow Warriors.