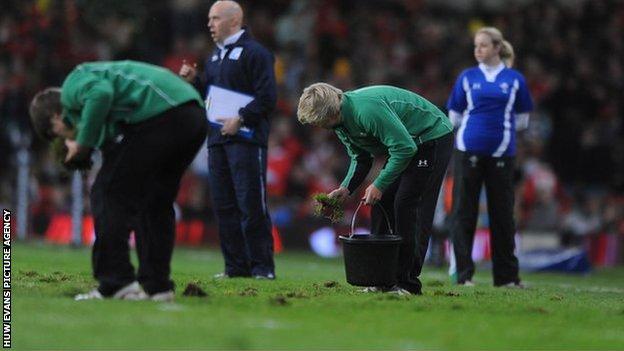 The Welsh Rugby Union is thinking about replacing the pitch at the Millennium Stadium with an artificial surface.

At present, the pitch is grown elsewhere before being moved into the stadium on special pallets.

The venue is set to host six games during the 2015 Rugby World Cup and the WRU believes a synthetic surface could be a practical alternative to grass.

Since the Cardiff stadium opened in 1999 there have been problems with the surface.

The pitch, which had to be replaced in 2009 because of a fly infestation which causes damage to root growth, has received criticism from several quarters.

Wales utility back Leigh Halfpenny spoke out after they were beaten by New Zealand in 2009.

The International Rugby Board has already approved the use of artificial pitches consisting of a stone base layer, on top of which is a thick black rubber shock pad and a covering of green yearn 5cm deep with an in-fill of black rubber crumbs.

Lewis accepted that there have been major concerns over the state of the pitch at the stadium since it was opened in 1999.

"We've always had issues with the playing surface at the stadium," he said on BBC Radio Wales.

"That's certainly is no fault of the outstanding staff we've got who've been making the best of what is a very difficult situation."

He revealed that last August the WRU had almost approved the installation of a hybrid pitch at the stadium, similar to the one at the Liberty Stadium in Swansea.

That system uses a weave of artificial grass and turf.

But with the governing bodies of rugby and football recently approving a new pitch system, Mr Lewis said the situation had changed.

"What's come up over the past few months is a completely artificial surface, not only for rugby but for football as well and both the IRB [International Rugby Board] and Fifa have standardised and approved this sort of pitch use," he said.

"In about six weeks' time you'll see the first professional rugby game played on such a pitch in Saracens."

The English Aviva Premiership club will play on an artificial pitch when they move to their new Allianz Park home in February.

"That'll give us a better idea of how this pitch can sustain full-on professional rugby," added Lewis.