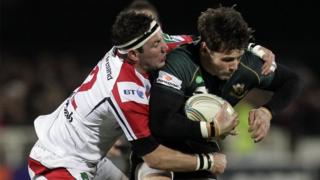 Ulster coach Mark Anscombe said his side were unable to match the intensity and commitment of their win over Northampton a week earlier as they slipped to defeat against the Saints in the Heineken Cup.

"It shows if you drop your levels a few percentage points against good teams that they will bounce back," said the Ulster coach, after his side's first defeat of the season.

Ulster flanker Chris Henry agreed that Northampton had done their homework on the Irish province after the previous game a week earlier.