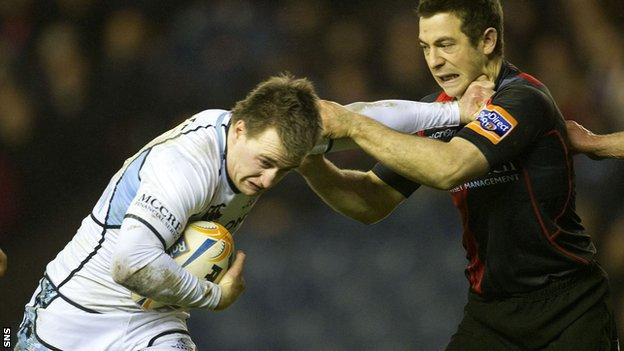 Gavin Hastings believes the festive double-header between Edinburgh and Glasgow will be key in determining selection for the Six Nations.

With Scotland losing all three autumn Tests and the head coach position vacant, places are up for grabs.

"On the back of a very disappointing series of internationals, these matches are going to assume huge importance," said former Scotland captain Hastings.

Glasgow host Edinburgh on Friday, with the teams meeting again at Murrayfield on 29 December.

While the matches are RaboDirect Pro 12 fixtures, the aggregate points winners will also take home the 1872 trophy.

Glasgow sit fifth in the league, with Edinburgh seven points behind in seventh place and both sides are smarting from poor showings in the Heineken Cup.

Edinburgh, who reached the semi-finals of Europe's premier contest last season, are without a point from four outings and are yet to register a try.

Glasgow are also bottom of their pool after four defeats.

"The inter-city clash has been a huge boost to the rugby calendar, the Scottish public has taken to these matches," Hastings told BBC Radio Scotland.

"A few years ago Dan Parks completely outplayed his opposite number Phil Godman.

"And, for me, it was absolutely right that Dan went on to represent Scotland in the Six Nations.

"Whoever plays best in the head-to-heads, that player should be selected and the players will take these games very seriously indeed.

"It's a bit like way back in the dim and distant past when we always had the national trial early in the New Year and got fantastic crowds."

Hastings made 61 appearances for Scotland, amassing 667 points, which was a record tally until overtaken by Chris Paterson in 2008.

The full-back was a member of the Grand Slam-winning side of 1990 and the team that reached the semi-finals of the World Cup the following year.

Scotland failed to reach the knockout phase at the last World Cup and followed that with a dismal Six Nations whitewash.

"Scotland is almost at the bottom of the pile and there is only one way to go," added Hastings, who scored 17 tries for his country.

"We'll have a new coach for the Six Nations.

"The likelihood is that it will be [attack coach] Scott Johnson and hopefully he can find something with his vast years of experience to lift the players.

"If anyone thinks we're going to get three or four victories next year, then my goodness me, we'll be doing very, very well to do that.

"You just want the players to really start playing for each other and playing for the jersey, doing justice to all the people who have been in the dark blue of Scotland before."