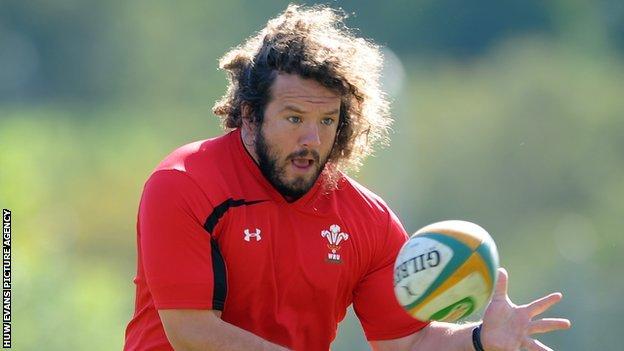 Jones, 31, was an injured bystander as Wales lost to Argentina, Samoa, New Zealand and Australia.

He returned from a knee injury in the Ospreys' Heineken Cup win over Toulouse at the weekend.

"If we can get everyone fit, we can give anyone in the Six Nations a run for their money," said Jones.

The return of the 83-times capped tight-head prop Jones came as a boost to Wales following a spate of injuries.

But he and uncapped Scarlet Samson Lee returned to duty in the Heineken Cup's fourth round.

I don't think we've turned into a poor team overnight. There's a lot of talent in the squad

And Exeter's Craig Mitchell expects to return over the festive period to begin his challenge for a Wales squad place following an elbow injury suffered in September.

But Jones' fellow Osprey Aaron Jarvis (knee) is not expected to play again this season while versatile Scarlet Rhodri Jones (shoulder) has yet to return from surgery in September.

However, Wales wing George North returned in the Scarlets' European Cup defeat at Exeter while hooker Richard Hibbard greeted Jones on his entry from the bench against Toulouse.

During Jones' absence from the Wales squad, there was criticism of the Welsh Rugby Union's decision to allow Warren Gatland to concentrate on British and Irish Lions preparations for the Argentina and Samoa games Wales lost.

Stand-in coach Robert Howley will continue to deputise for Gatland during the Six Nations and Jones has faith in that situation.

"It was tough to miss the autumn series because you know what it's like in camp - the build-up is always exciting.

"It was probably a good series to miss, the way it turned out.

"But I don't think we've turned into a poor team overnight. There's a lot of talent in the squad.

"If we can get everyone fit, we can give anyone in the Six Nations a run for their money.

"A lot has been made about Warren Gatland being away on Lions duty, but the coaches there are fantastic anyway.

"Of course Gats is a big influence, but I don't see why we can't retain our title.

"It's obviously going to be difficult, but I don't see why not."