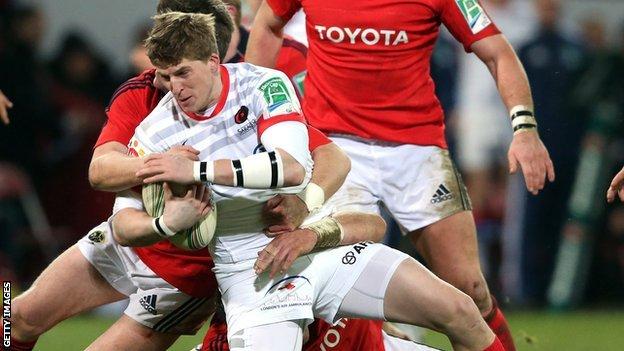 Saracens winger David Strettle has said his side are continuing their bid to improve their standing in European rugby after Sunday's Heineken Cup win over Munster.

"It's a case of putting the gameplan on the pitch. We did that this week," Strettle told BBC Three Counties Radio.

Four penalties from England fly-half Owen Farrell saw Saracens through to their third victory from four matches this season in a competition they have long held desires of winning.

"We just weren't there last week and we thought we would bring the intensity this week and earn the respect off them, which we know they warrant," said 29-year-old Strettle.

"Munster have got one of the best defensive kicking games. We knew it was going to be tough because when we wanted to play our game it was against another team who can also do their own thing very well.

"But we stuck to our guns and the boys defended for their lives."

"We've got a massive game next week and we don't look any further than that," added England international Strettle.

"Every month's big. We've got to keep the momentum going. We've got some good momentum now and we can hopefully take that into next week."