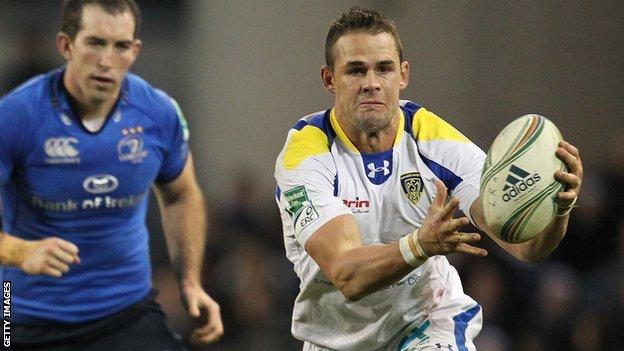 Clermont Auvergne's Welsh full-back Lee Byrne is out of action until at least the New Year after suffering a cracked bone in his back.

The 32-year-old British and Irish Lion sustained the injury in his side's 28-21 Heineken Cup win over Leinster at the weekend.

A Clermont Auvergne statement read: "He [Byrne] suffered a broken bone in his fifth vertebra."

Byrne has not played for Wales since his 46th cap at the 2011 World Cup.

He joined Clermont on a three-season deal ahead of the 2011-12 season, linking up with the French team following his duties at the 2011 tournament in New Zealand.

However, the 2005 and 2008 Grand Slam-winner and 2009 Lions tourist to South Africa remains an international contender.

Cardiff Blue the incumbent Wales full-back, is scheduled to return from a neck injury ahead of the Six Nations.

Liam Williams of the Scarlets has also overtaken Byrne in the Wales pecking order.