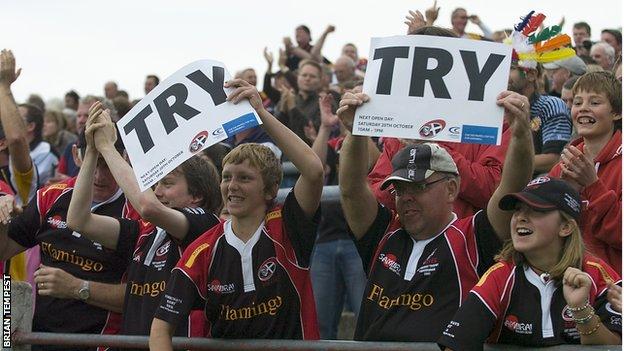 The Pirates returned to Penzance in 2010, having spent four seasons in Camborne and one at Kenwyn, near Truro.

"We wanted to take control of our destiny rather than be led as we have been," he told BBC South West Sport.

"We hope to start work on the Mennaye in the close season but there are still a number of hoops to jump through."

Coward added: "The point is the future is uncertain, what do we do? Do we do nothing, while the facilities deteriorate further?"

The Pirates have lost the last two Championship play-off finals against Worcester , but they would not have been promoted even if they had won.

Clubs wishing to gain promotion to the Premiership must have a minimum 10,000-seat stadium but

"For several years we have worked around the idea that a stadium would be built," he added.

"So there was little need to improve the facilities, but the prospect of a stadium in the near future is remote."

And the club's after plans for a Premiership-standard ground in Cornwall were delayed, leading to the

Coward continued: "The idea of playing in the Premiership in Penzance is a lovely thought and we have looked into what expansion could be achieved here.

"There may be significant changes to the Premiership criteria when the current term ends in 2015/16, but that's a long, long way off."

Although their Premiership aspirations have been put on hold in the short term, Coward does not believe this will hamper the club's ability to recruit ambitious players.

"On the flip side of the coin we've been quite successful at finding players that Premiership clubs become interested in.

"They can showcase their skills at the Pirates and it puts them in the shop window."