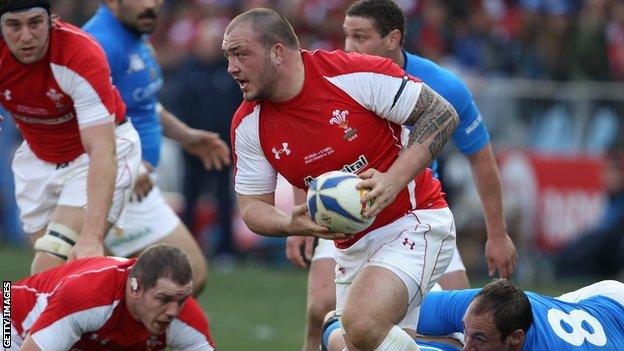 Exeter Chiefs prop Craig Mitchell has said he is desperate to get back playing again for club and country.

The Welsh international, who in September, is two weeks away from a return to action.

"My focus is on getting fit with Exeter and then we'll see what happens with Wales," Mitchell told BBC Radio Devon.

"I'm back in full training so two weeks and I'll be up to speed and I'll try and fight my way back into the side."

He added: "What Wales have achieved in the past year is massive and I want to be a part of it. The only way to do it is to be playing well for Exeter."

Mitchell, who has 11 caps for Wales, has had an injury-interrupted two years after he dislocated his shoulder in his country's 19-13 Six Nations win over Ireland in March 2011, an injury that forced him out of the rest of that season.

He then had to have surgery on a torn shoulder earlier this year before suffering a bicep injury early in this campaign.

"It's been frustrating, especially after being out for so long with my shoulder," said Mitchell.

"Then I came back, played a couple of games and then tore my bicep."

Despite his injury setbacks, Mitchell admitted he had one eye on the upcoming Six Nations. He said: "It's always my ambition to play for Wales and achieve great things with them."