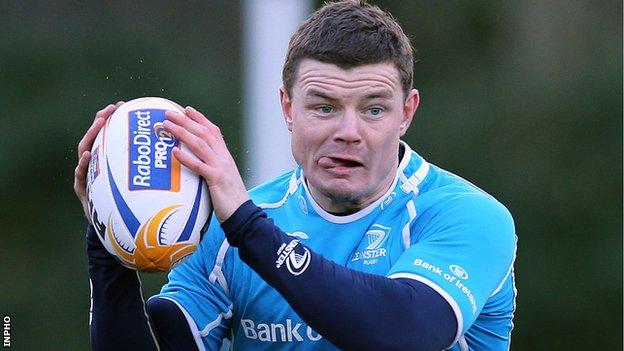 Ireland skipper Brian O'Driscoll has taken part in his first on-pitch training session with Leinster since having ankle surgery.

The 33-year-old centre missed the series of autumn internationals after picking up the injury playing for his province in the Pro12.

Ireland coach Declan Kidney is hoping the inspirational O'Driscoll will be fully fit in time for the Six Nations.

The Irish play their first match against Wales in Cardiff on 2 February.

Leinster also hope to have backs Luke Fitzgerald and Rob Kearney back within the next few weeks.

Both also missed the autumn internationals, Kearney with a back injury while Fitzgerald has been out of action for much of this year with a neck problem.

O'Driscoll's return is welcome news for Kidney who had to do without Paul O'Connell, Rory Best, Stephen Ferris and Sean O'Brien for the November internationals.

However, winger Tommy Bowe is now a doubt for the Six Nations after suffering ligament damage playing for Ulster against Northampton on Saturday.