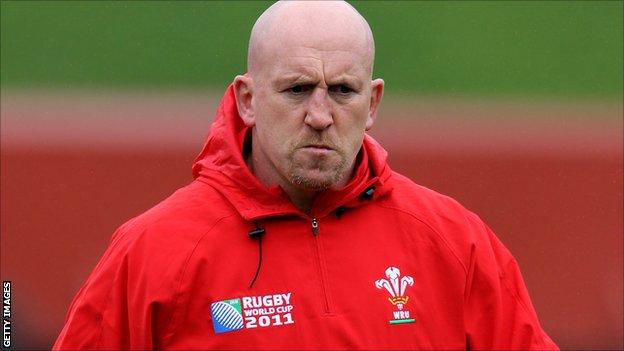 Edwards, 46, holds the same role for the Welsh national side, but has endured a difficult few months.

Irish have the worst defence in the Premiership, while Wales struggled in the Autumn internationals and Edwards was excluded from the Lions staff.

But Smith told BBC Radio Berkshire: "I am backing Shaun Edwards 100%, he's the best defence coach I have worked with."

"The Lions is all about integration and the management party is as important as the players. If Gatland had chosen Edwards as well, it would have been very Welsh-centric. PR-wise it is a good move, and in the short time Andy Farrell has been involved in international rugby, he has had an impact. What you are looking for in a coach is someone who has the drills and application, and commands respect. I think Farrell has that. Edwards has the reputation and Farrell is fast growing one. But the central point is Gatland has chosen what he believes to be the best combination of coaches to be successful."

Irish, who have conceded 25 tries and 291 points in total this season, sit second bottom in the Premiership table but Smith says he has total faith in Edwards.

"I could not speak more highly of him," added Smith. "It's a challenging time but Shaun is not missing the tackles."

Lions coach Warren Gatland called the decision to exclude Edwards "agonising" but Smith says criticism of London Irish's results this season should be directed towards himself, adding that the club will not be be looking to relinquish the former rugby league star from his position.

"In terms of the performance of the club the buck stops with me," he said.

"The boys love him here. He delivered an outstanding session today [Tuesday] and winning speaks in team meetings and you could hear a pin drop.

"There is a massive amount of respect for him but he is a very intense man and proud man and I am sticking with the crew I've got. Loyalty is a massive part of the game and if the club wants to get loyalty then it needs to show loyalty."

And London Irish fly-half Ian Humphreys says it is the players and not the coaches who are to blame for their poor results this season.

"Yes, you look at the score and you say, 'who's fault is this?'" Humphreys told BBC Radio Berkshire.

"But you go through each game and I would be surprised if more than two of the tries conceded were down to defensive issues.

"It's a cop out for a player or people to blame coaches. We are the ones on the pitch and if we do not do what they tell us then that is not their fault.

"We do not need to defend Shaun Edwards, his record speaks for itself and I see him as one of the best I have ever worked with. It is the players' fault we are losing."