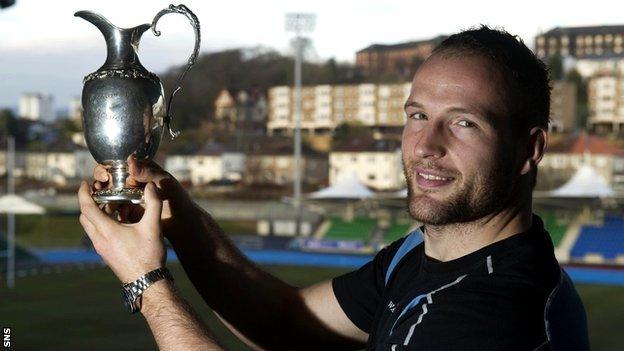 Glasgow Warriors flanker James Eddie says his side are intent on retaining the 1872 Cup as they prepare to face Edinburgh.

Warriors consolidated their hold on the trophy last year after drawing at Edinburgh and winning in Glasgow in the festive double-header.

"We want to go for four in a row, but we know it's not going to be easy," he told BBC Scotland.

"It's going to be tight, but we want to hold on to that trophy."

Eddie admitted that the personal rivalry between the sets of players in the derby was something he relished.

"It's brilliant having that rivalry and having those individual battles," he said. "But the main thing is Glasgow getting the win."

The 27-year-old also conceded that both Scottish sides had something to prove after poor results in their Heineken Cup campaigns.

"I think both Glasgow and Edinburgh will be a bit disappointed," he said. "And we both feel when we're playing that we're representing Scotland in Europe."

Eddie also revealed the disappointment in the Glasgow camp after their narrow defeat by Castres in France.

"I think a few things let us down," he admitted. "Our discipline was poor.

"There'll be a big emphasis on that this week so we don't give away any silly penalties and give Edinburgh the opportunity of three points.

"Castres were talking about a bonus-point win and we found that quite disrespectful and we wanted to prove a point and were unlucky not to get a win."

Eddie said that eradicating the mistakes that are costing Glasgow this season would be key to lifting the 1872 Cup.

"I think it just comes down to personal responsibility; sometimes it's just knowing not to go for the ball when it's not really on," he said.