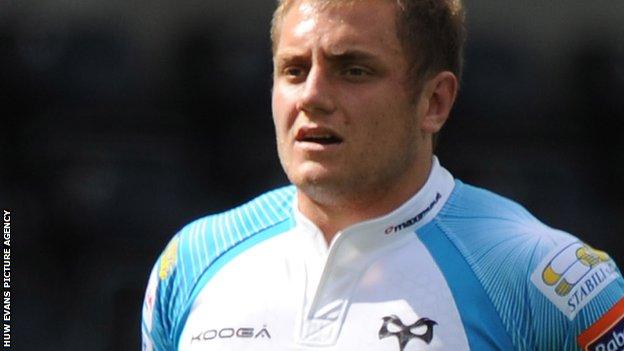 Lock James King has spoken about the injury that he nearly cost him an ear while playing for Ospreys.

King suffered a lacerated ear injury in a collision with Alex Cuthbert in a Pro12 clash with the Cardiff Blues in January 2012.

The 22-year-old was rushed to hospital during the game for emergency plastic surgery at Morriston Hospital, Swansea.

"It was a freak accident really," said King ahead of Boxing Day's derby with Scarlets at the Liberty Stadium.

Ospreys head coach at the time Sean Holley described King's ear as "hanging off by a thread".

King was taken to the Welsh Centre for Burns and Plastic Surgery at Morriston Hospital where surgeons could perform the ear-saving operation after Ospreys' 17-12 victory at the Liberty Stadium.

"It was seven minutes in and Alex Cuthbert stepped off the wing and I went to tackle him and my ear must have got caught in his shorts," said King.

"I hit the floor, there was a bit of blood and I was thinking I must have split my head, or something, but my ear was dangling down.

"In the physio room, they told me I had to go for surgery. It was all superficial damage because it was just the outside of the ear. Fair play, the surgery at Morriston Hospital was fantastic.

"There was no lasting damage and now I wear a scrum-cap and have taping underneath it as a precaution and I will probably do that for the rest of my career."

King, who as sidelined for a month after his freak injury, has now returned to action and made his Heineken Cup debut in the recent defeat to Toulouse.

He retained his place for the return leg a week later as the Welsh side kept in contention for the quarter-finals with a 17-6 win and he is expected to start against Scarlets in the Boxing Day derby at the Liberty Stadium.

"They had a good start to the season but they've got their injury problems as well," said King.

"It's a game we think we can win. The support we had for the Toulouse game was fantastic and hopefully we can emulate that and get the win."