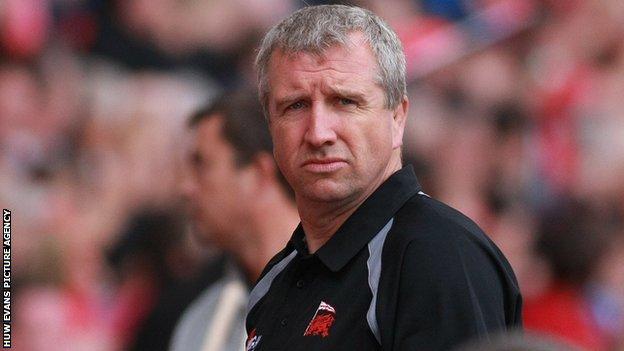 The to boost the four teams on and off the field.

"But I hope it's not a talking shop and I hope things can.. be actioned upon to move the professional game forward."

Ospreys chief operating officer Andrew Hore has recently hit back at criticism after a disappointing return by three of Wales' regions in the Heineken Cup.

The Ospreys have won two out of four games, while the Blues and Scarlets are winless in the opening four pool rounds of Europe's top tier tournament this season.

Jones, who was Ospreys coach from their 2003 launch until his May 2008 departure, says all four Welsh regions lack financial resources.

The man who has witnessed his Exiles side impress on their debut season in the Aviva Premiership, detects a major difference in Wales since he left the Ospreys.

"When I was involved in regional rugby the union and regions worked very well together when we all started and we were all pushing in the right direction for the greater good of the national side," said Jones.

"I'm not really sure what's happened since, but there's obviously a lack of investment into the professional game, which I'm sure the regions are desperate to address."

There's obviously a lack of investment into the professional game, which I'm sure the [Welsh] regions are desperate to address

The four regions are working under which many argue has contributed to the departure of high-profile players from Welsh regional to French club rugby.

Blues centre Jamie Roberts is set to join them at the end of this season, though the Cardiff region hope to secure 22-year-old international wing Alex Cuthbert on a three-year deal.

Cuthbert remaining at the Blues would be welcomed in Wales amid what is seen as a worrying trend in the face of heavily-bankrolled French clubs.

On the field, coach Simon Easterby, has guided the Scarlets to second behind Ulster in the Pro12 only to see his side lose four times in the Heineken Cup this season.

Exeter completed the double over the Scarlets following earlier defeats by Leinster and Clermont Auvergne.

And while Easterby understands the criticism that riled Hore, he says a more "balanced" view should be considered.

"What's slightly unbalanced [about the criticism] is the fact that we're battling against teams with huge budgets [and] bigger depth in their squads.

"And ultimately that is going to have an effect if you can't put your first team out week-in, week-out at the top level - and we haven't been able to do that in every game."