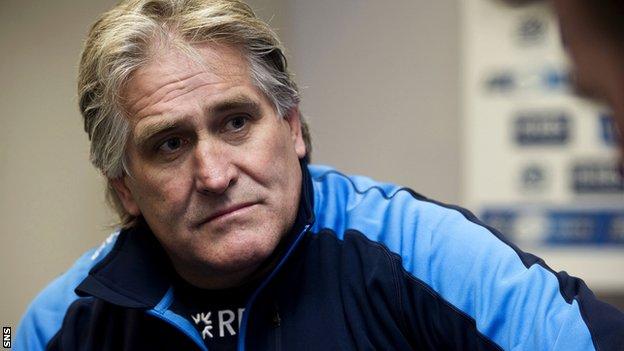 Scott Johnson has been confirmed as Scotland's interim head coach.

The 50-year-old Australian will lead the team into the Six Nations tournament, which begins against England at Twickenham on 2 February.

"It's an honour to take charge of the national team for our imminent campaign," said Johnson.

"I will be doing everything I can to bring the best out of our players as we all seek to achieve winning performances."

Johnson joined the Scotland staff under Andy Robinson as attack coach for this year's summer tour.

Robinson ended his three-and-a-half year reign when he resigned after defeat in all three autumn Tests.

Scottish Rugby's chief executive Mark Dodson said: "Scott has a wealth of experience of international rugby, which was instrumental in his appointment earlier this year as our senior assistant coach.

"He has coached with Australia, Wales and the USA and knows what it is to prepare teams to win on the international battleground.

"Scott knows our players and coaches well and is determined to hit the ground running with a successful RBS Six Nations Championship."

An interim forwards coach will also be appointed in due course.

Scotland, who lost all of this year's Six Nations matches, have slipped to 12th in the world rankings following November defeats by New Zealand, South Africa and Tonga.

The dismal defeat by Tonga at Pittodrie was the last straw for former England and Edinburgh coach Robinson, who lost 10 of his last 13 matches.

Johnson's arrival as attack coach/senior assistant coincided with a successful summer tour that yielded wins in Australia, Fiji and Samoa.

Glasgow Warriors head coach Gregor Townsend, who preceded Johnson in the role of Scotland attack coach, said he thought Johnson would "do a cracking job".

Townsend said: "I've been very lucky to have Johnno working with me a fair bit this season. He comes through quite a lot. He's been a mentor to me, just like Andy Robinson was before.

"He's a cracking coach and Scotland are going to do well under him."

Johnson was skills coach for Wales for five years, which included the 2003 World Cup and a Grand Slam success in 2005.

But his three-match spell as interim coach in 2006 was less successful as his team suffered defeats to Ireland and France and drew with Italy.

Johnson, who never played for the Wallabies, returned home to become attack coach for Australia ahead of the 2007 World Cup.

After less than 12 months with the US national side, he returned to Wales as director of coaching with Ospreys for three years before his switch to Scotland.

"In the modern game he's probably one of the best coaches I've ever worked with.

"He's laid back off the pitch but very intense on the training field.

"I believe that we have good players in Scotland. Hopefully, we can get it right and take the next step.

"With a new coach, he can refresh everybody and go from there."